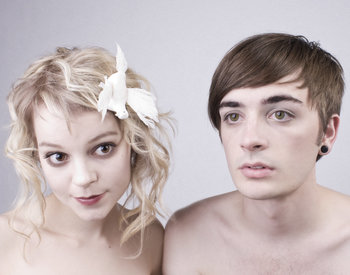 Nobody understands how powerful the... Internet is.
Influences:
"Welcome to our Computer Show. I'm Mars Argo"
Advertisement:

Mars Argo was a musical duo consisting of a girl (also named Mars Argo—real name Brittany Sheets) and Titanic Sinclair (Corey Mixter). They produced indie rock songs together and also did a series of somewhat bizarre artistic videos in a series called Computer Show, with cameraman Tony Katai. Collectively, the music and videos were labeled under the name Grocerybagdottv.

It began when they wanted to start their own YouTube channel with Radiohead songs in the background, but YouTube began pulling the videos down because of copyright issues. So they started producing their own music to use instead, which people began to get interested in, leading to them producing full-fledged songs under the name Mars Argo.

Their Computer Show videos were intended to be interesting, unusual, absurdist, and also comical. The videos had a wide range—some of them were satirical (poking fun at society and political views), some of them discussed their depression and anxiety at the inevitability of death, and some of them were just them doing whatever for fun.

The project's creation of their own music lead to a surprisingly huge amount of surreal but incredibly elegant music, even dropping a debut album entitled Technology is a Dead Bird, followed up by a multitude of singles such as "Runaway Runaway", "Stuck on You" and even an EP entitled Linden Place EP.

The music project and Grocerybagdottv abruptly ended however after the messy fallout between Sheets and Sinclair, with most of the videos off of the channel vanishing as well. Sheets also seemed to vanish despite updating fans that she would continue Mars Argo on her own, while Sinclair found a new partner to create music and similar surrealism that Mars Argo/Grocerybagdottv is based on. You probably have heard of it; it's called Poppy.

In April 2018, Sheets announced her return to music, along with a few other events discussed on Poppy's YMMV page. Although development is taking a while, Brittany has posted several unfinished lyrics snippets on her Tumblr in 2020 and confirmed that she's still actively making the album.

Due to the similarities of Poppy and Mars Argo, the tropes of her page will (somewhat) apply here as well.

Welcome to the TV Trope Show...