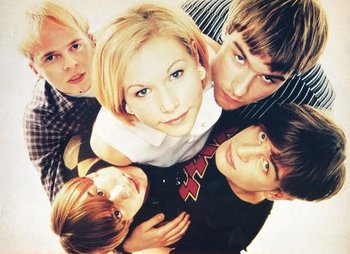 "Rise and shine, my sister..."
The Cardigans are a pop group formed in October 1992 in Jonkoping, Sweden. Their big US airplay hit was "Lovefool" from their third album First Band on the Moon (and perhaps more pertinently featured in the William Shakespeare's Romeo + Juliet soundtrack), though their big hit album internationally was the Darker and Edgier follow-up Gran Turismo, featuring the European hits "My Favourite Game" and "Erase/Rewind".

Tropes associated with The Cardigans: