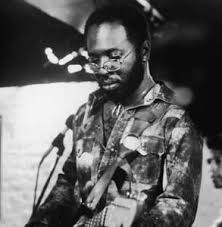 Curtis Mayfield
People get ready for the train a-comin'.
You don't need no baggage, you just get on board.
From "People Get Ready", by the Impressions
Freddie's dead. That's what I said.
From "Freddie's Dead", Super Fly
Advertisement:

Singer, songwriter, guitarist, bandleader, producer, and label owner Curtis Lee Mayfield (June 3, 1942 – December 26, 1999) was a primary exponent of sweetly melodic, yet socially conscious soul/funk. He began his career with the Impressions, leading them through a series of upbeat love songs ("It's All Right") and soaring pleas for racial progress ("Keep On Pushing", "This Is My Country", "Choice of Colors"). He left the Impressions in the 1970s, to begin a solo career that saw his social conscience deepen. His best known achievement as a solo artist was the soundtrack to Super Fly. "Freddie's Dead" and the title track were his biggest solo hits.

Mayfield also wrote music for the movies Short Eyes, Let’s Do It Again, and Sparkle. His popularity waned in the 1980s, and he was paralyzed from the neck down following an accident at an outdoor concert in 1990. Nevertheless, he recorded a final album, New World Order, in 1996. He died three years later from complications of diabetes; his last vocal performance was on the Bran Van 3000 song "Astounded", which would be released in 2001.

Tropes associated with Curtis Mayfield include: