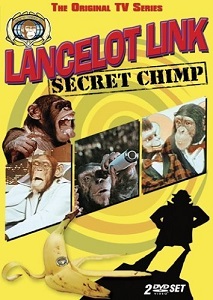 This early 1970s series was basically Get Smart with Chimpanzees (and in fact was created by two of that show's writers).
Advertisement:

Lance Link and his partner, Mata Hairi, are agents of A.P.E. (the Agency to Prevent Evil), led by Commander Darwin. They oppose the sinister plans of CHUMP, whose members include Baron Von Butcher and his chauffeur Creto, the Dragon Woman and her assistant Wang Fu, Mad Scientist Dr. Strangemind, evil sheik Ali Assa Seen and the Duchess.

Lance and Mata are also part of a rock group called the Evolution Revolution, who are always introduced by Ed Simian.

Airing on ABC, the first season included a selection of Warner Bros. cartoons which up to then had not been screened on TV (mainly the "Dork Age" cartoons with the Daffy/Speedy pairing along with Cool Cat, Merlin the Magic Mouse, and Bunny & Claude).

The technique of lip-syncing chimpanzee actors was already well-known in Britain because of its use in a long-running series of tea commercials.