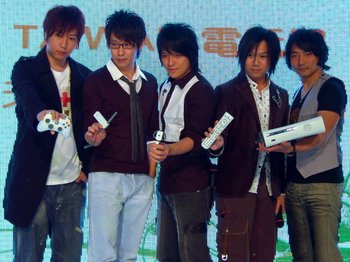 From Left to Right: Ashin, Guan You, Monster, Masa, and Stone
Advertisement:

Mayday (Chinese: 五月天 Wǔ Yuè Tīan）is one of Taiwan's most famous bands and one of the most popular bands in the Sinophone world. A Taiwanese rock band that was formed in the Late-1990's, members consist of Ashin (Lead Vocals), Monster (Lead Guitarist and Band Leader), Stone (Rhythm Guitarist), Masa (Bass), and Guan You (Drums).

Originally performing under the name "So Band", the band was formed during their High School years with Ashin, Monster, and Qian You Da who was the first drummer. They were eventually joined by Masa and Stone at the same school. During these years, they were active in the burgeoning Taiwanese Rock scene.

Songs incorporate themes ranging from the literary (Sun Wukong), to the fictional (Superman and Mickey Mouse), to capturing the sentiments of the youth. Most of their songs are in Mandarin with a number of songs sung in Taiwanese Hokkien. In recent years, they've also released Japanese covers of their songs.