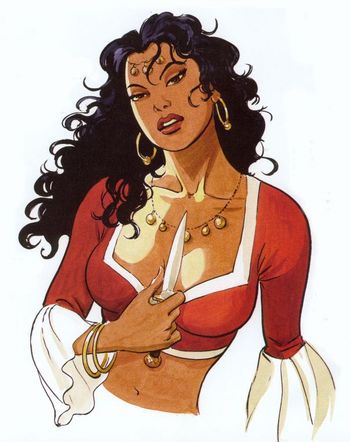 "I feel her, I see her, the sun caught in her raven hair is blazing in me out of all control!"
"From nowhere through a caravan
Around the campfire light
A lovely woman in motion
With hair as dark as night
Her eyes were like that
Of a cat in the dark
They hypnotize me with love
She was a gypsy woman"
—Curtis Mayfield, "Gypsy Woman"
Advertisement:

The Romani people have long had an ambiguous status in Western societies and popular culture: alien enough to serve as a convenient Other, but geographically near at hand. As a result, they have been both vilified and exoticized. The stereotype of the Hot Gypsy Woman is an example of the latter.

She typically has olive skin, dark hair which she wears loose, a low-waisted long skirt with a slit up the side, a low-cut midriff-baring blouse, bare feet, and plenty of jewelry. She also tends to have a fiery personality and to be overt in her sexuality, sometimes making her an Ethical Slut. If 19th-century adventure fiction is to be believed, there is also something special about the eyes of these women, which are dark and variously described as large, beautiful, fascinating, and/or hypnotizing.

Older Than Steam, the trope tends to be mostly encountered in stories set in the early modern era. In North America, almost the same archetype is used with a different ethnic origin as the Spicy Latina.

Be aware that the term "Gypsy" is rejected by many if not most Romanies because of its negative connotations, and calling real Romanies by that name is likely to be considered offensive.

The Hunchback of Notre Dame