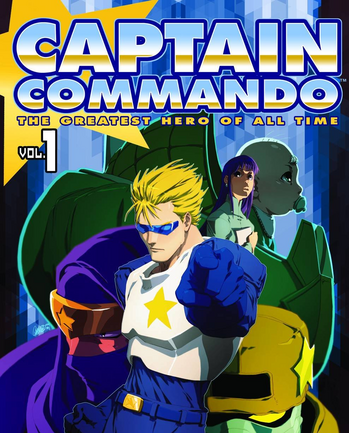 "Captain Cold... Captain Boomerang... they probably would have gone for it if I was a captain."
— Trickster, Justice League Unlimited, "Flash and Substance"
Advertisement:

There is a definite prejudice in Superhero comics towards using force rather than reason to sort things out. As a result, a fighting man with a military-sounding background gets more respect than a thinking man with a doctorate or a medical qualification. This is probably an inheritance from the early days of comics, where the patriotic World War II setting made military good guys obvious. The rank of "Captain" probably became common as, in the Army, it is low-ranking enough to be approachable and avoid the inevitable moral ambiguity of the most senior ranks, but high enough to deserve some respect.

The upshot of this is that characters whose names begin with "Captain" are almost always good, unless explicitly subverting this or a Nazi. (In the case of a Nazi, or in the case of German officers from many other periods, the correct title Hauptmann could occur.note  Until 1945 cavalry and some artillery captains were properly called Rittmeister. From the 17th to early 19th century infantry and foot artillery captains could also be called Kapitän in many German armies. If the Nazi Captain is referred to as Kapitän we might have a research mistake, since Kapitän exclusively refers to the navy (Kriegsmarine) and merchant marine. Another trap for the unwary is referring to an SS officer of this rank as Hauptmann when he would in fact be a Hauptsturmführer

"Commander" carries similar connotations to "Captain." As a naval rank, it's a likely designation for commanding officers in Space Navies.

Not necessarily The Captain; in fact, The Good Captain is rarely seen leading anyone, despite his rank.