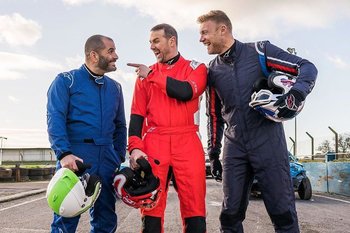 The main presenters from Series 27: (from left to right) Chris Harris, Paddy McGuinness, Andrew "Freddie" Flintoff
"This... is a car programme. There will be no cushions, there will be no rag-rolling, no-one will sing, and at the end of the series, no-one will have a recording contract. This is our new base, and this is our purpose-built test track. There are no traffic jams here, well... apart from this one, and no bus-lanes either. This... is Top Gear!"
— Jeremy Clarkson, First Episode Intro

Top Gear is an award-winning (BAFTA/Emmy) BBC magazine series about automobiles and motoring. It started in 1977 as a fairly conventional auto show, but after being revamped in 2002 (following a one-year cancellation in 2001-2) it took a turn to become more overtly humorous. The show is very popular, with an audience estimated at about 8 million per week on the BBC and around 350 million worldwide.

In 2002, the show underwent a significant revamp thanks to one of its old presenters, Jeremy Clarkson.note  Another old presenter, Andy Wilman, also had a significant hand, but remained behind the scenes as the executive producer. Alongside fellow presenters Richard Hammond and James May,note As May, who also presented the old Top Gear series in 1999, wasn’t available for the first revamped series, Jason Dawe took the third position for that series only, the series became a global phenomenon, which extended far beyond driving enthusiasts or even car-owners, thanks to the interplay of the three Vitriolic Best Buds and what May referred to in an interview as "self-indulgent cocking-about." In addition to doing more conventional car test drives and reviews, the series embarked on a number of segments which featured unique and humorous premises. The show also has an official, legal and above-board YouTube channel

with abridged versions of various segments.

After an incident in March 2015 where Clarkson assaulted a producer, his contract for the show was not renewed by the BBC; subsequently, May and Hammond decided the three were a set and opted not to return to the show either. After much speculation, Chris Evans was tapped to host a new version with Matt Le Blanc later added as a second featured co-presenter. Sabine Schmitz, Chris Harris, Eddie Jordan, and Rory Reid also joined on various segments and also in the show's new 'post-game' show, Extra Gear, which 'airs' on the online-only BBC3. And, like all the previous versions of Top Gear, the show retained its voiceless, faceless "tame racing driver", the Stig. note  To which Evans exclaims in the first episode, "We got custody, we got custody!", the Stig originally being an invention of Wilman & Clarkson.

Version 3.0 debuted on May 29, 2016 for a run of six episodes. The re-tooled show seemed to focus more on car reviews and its celebrity interview segments (removing the news segment completely and moving it over to Extra Gear) though they did go on some trips and put on some wacky stunts reminiscent of the previous incarnation. Also, the 'Star In A Reasonably Priced Car' segment was retooled to use a BMW Mini Cooper rally car, and the test track was expanded, putting the celebs through a water splash and a small jump. (Test laps with The Stig still used the same track as before.) After fan criticism and declining ratings, in July 2016, Evans announced he was departing the show after only one season. LeBlanc, on the other hand, was warmly welcomed by viewers and so the BBC locked him into a deal through Series 25.

Series 24 debuted on March 5, 2017, slimming the amount of presenters back down to three, LeBlanc, Reid, and Harris. (Comedian George Lewis was made the new host of Extra Gear). Featuring a new two-tiered set, the celebrity segment has been retooled (they stick around longer, they drive a "Reasonably Fast" car, a Toyota GT86), the test track has been put back to its original configuration, and in a surprise, the Stig doesn't appear - instead, Harris takes the guest around the track, alternately advising them and berating them (The Stig does appear in the 2nd episode, but to make a test lap only.) Initial reviews, in comparison to the Evans-led previous season, have been generally positive.

note In the States, the show airs a week later on BBC America.

In 2018 LeBlanc announced that Series 26 would be his last, citing the extensive time away from his family and friends during filming as the deciding factor in his decision to leave. Rory Reid, meanwhile, stepped away from the main show and moved completely over to the digital-only Extra Gear.

Chris Harris remained with Top Gear and, beginning in Series 27, is joined by Paddy McGuinness and former cricket star Andrew "Freddie" Flintoff to form a new trio of blokes faffing about in cars. Beginning with Series 29 in late 2020, the show was promoted from BBC Two to BBC One.

Meanwhile, Clarkson, Hammond, and May were hired by Amazon Prime to host The Grand Tour, a Spiritual Successor to their tenure on Top Gear,note The show is also produced by Andy Wilman, as he left when the presenters did as well which debuted on the streaming service on 18 November 2016. After a strong premiere, and receiving some mediocre reviews for the show's second episode (and occasionally panned for its overly-staged dialogue), overall, the show's first 13-episode run was enthusiastically well-received.

Becoming quite an international favorite, Top Gear has spawned a number of localized spin-offs:

To add a frequently asked question, it has nothing to do with Kemco's racing game series with the same name, but does have a relationship with the Forza series for Xbox. There was enough confusion about this that the BBC sued Kemco, the publishers of that game (which was called Top Racer in Japan for the first two installments). The Beeb holds the copyright to the title several times over; the original use of the show name was way back in 1967 with the birth of Radio One. Left-field DJ John Peel presented Top Gear with John Peel, which showcased the very best in avant-garde music, with comedy interludes from the sort of people who later became Monty Python and The Bonzo Dog Band.

This show is Troperiffic and currently nearing being Trope Overdosed. Therefore, examples have been split into multiple pages:

"And on that bombshell, it's time to end. Goodnight!"
Feedback