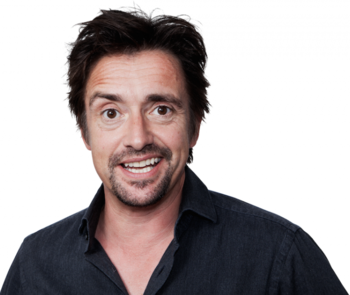 The Hamster with the pearly whites.
Richard Mark Hammond (born 19 December 1969) is an English television presenter, writer, and journalist best known for co-hosting the motoring programmes Top Gear (from 2002 to 2015) and The Grand Tour alongside Jeremy Clarkson (who Hammond was a huge fan of during the "Old Top Gear" days) and James May. He has also presented Brainiac: Science Abuse and Total Wipeout (the British version of the 2008 American show Wipeout), among others.

"Hamster" has a bit of infamy with crashing things; he miraculously survived a crash in a jet-powered car he was driving for a Top Gear segment on September 20 2006. The car reached speeds of 319 mph (513 km/h) at the time of the crash, which gave him brain damage. He returned to Top Gear in the first episode of series 9 that broadcast on 28 January 2007 where he got a hero's welcome. On 10 June 2017, after having completed a hill climb in a Rimac Concept One for The Grand Tour, he lost control of the electric sports car as it ran off the road and tumbled down the hill. Despite it landing upside-down, he was conscious and managed to escape with only a knee injury that needed a plate inserted.