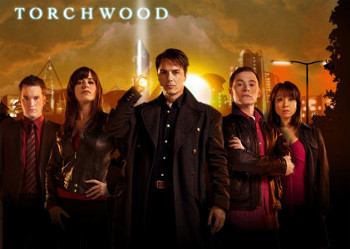 Protecting Wales from the scum of the universe.
The 21st century is when everything changes, and you gotta be ready.
—Captain Jack Harkness
Advertisement:

Torchwood is a Spin-Off of the British science fiction institution Doctor Who, and set in the main canon Whoniverse. It's Darker and Edgier, Hotter and Sexier, and Bloodier and Gorier — In many ways the antithesis of Doctor Who, apart from the camp.

This page is for series 1 and 2 and the show in general. For tropes in the later seasons, please see their own trope pages:

The show follows a men in black-esque group of government agents who collect the Applied Phlebotinum left over from alien incursions and time-travel weirdness, and use it to defend Great Britain. They are not answerable to the elected government, or any other body (except, technically, the Queen herself).

The group's leader is the omnisexual Captain Jack Harkness, a former con man from the 51st century. In Doctor Who, he Came Back Wrong in the year 200100, unable to age (much), sleep or die. He subsequently traveled to the 19th century and, due to a broken time machine, got stuck on The Slow Path. Jack hopes to be cured of his immortality by the Doctor, and patiently waits for him to turn up in Cardiff. Meanwhile, the series follows Naïve Newcomer PC Gwen Cooper as she meets Jack, joins Torchwood, and learns to live with the idea of Aliens in Cardiff.

After the destruction of Torchwood London in Doctor Who, Jack incorporates its remains into his significantly smaller Cardiff branch. It's built on top of a spatio-temporal rift (first seen in Doctor Who) through which aliens regularly stumble. They have an Elaborate Underground Base, complete with a pterodactyl. Although ostensibly a secret organisation, they're infamous with the police as well as with the locals. And their idea of secrecy involves driving around in a van with the word "Torchwood" in big yellow letters on it and ordering pizza under the name "Torchwood" to be delivered at their unlocked front door.

Before the series aired, "Torchwood" was frequently mentioned or alluded to in Doctor Who. Tosh first shows up in "Aliens of London". The word "Torchwood" was subsequently an Arc Word in (nearly) every episode of series 2. In the 2005 Christmas Special "The Christmas Invasion", Harriet Jones (Prime Minister)note Yes, we know who you are. gives us our first look at Torchwood London, when she asks the organization to shoot down an alien spaceship. Torchwood is earlier/later founded in the episode "Tooth and Claw", the secret organization's Victorian-era origin story. The two-part season finale "Army of Ghosts"/"Doomsday" finally revealed the inside of Torchwood London, which was then immediately destroyed in the Battle of Canary Wharf. Series 1 of Torchwood takes place not long after this.

Has a recap page. Ho Yay goes on Doctor Who's page.

For a full list of novelizations and audio dramas, see this page

on The Other Wiki. For tropes pertaining to the series' Big Finish audio range, starting in 2015, see Big Finish Doctor Who.

On May 6th, 2017, Big Finish announced a Sequel in Another Medium, an audio drama series entitled Torchwood: Aliens Among Us (having already had success with stories set during the TV series for which all the regular cast had reprised their roles); the 12-episode drama, set to be released in three parts between 2017 and 2018, features Russell T Davies' "enthusiastic back-seat driving" (according to producer James Goss) and is considered the official Series 5 after Miracle Day. In June 2018, an official Series 6, "God Among Us", was announced, to follow a similar release schedule beginning in October 2018.