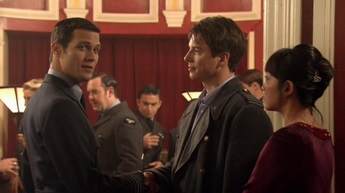 Jack and Tosh investigate an old dance hall where one can apparently hear mysterious 1940s music. They find themselves transported into, of all times, just before the Blitz, at a lovely going-away party for soldiers.

The rest of the crew are starting to get a little worried. The rift over Cardiff is spiking in activity lately, and they can't get in touch with Tosh to let her know. Gwen can't find them at the dance hall.

Back in 1941, Jack gets into a small scrape with a soldier, but his handsome superior breaks up the fight, introducing himself to Jack and Tosh as... Captain Jack Harkness. At that point, a nearby creepy old man takes a picture of the Captain and our wayward travelers, a picture that Ianto and Owen notice when going through old files of the dance hall.

So, with the only real plan being to open the rift, but Tosh having half of her magical equation to open it on her laptop, she scrawls down what she can get out before the battery dies. But they're interrupted by the old guy who took their picture: the caretaker, Bilis. After they make their excuses as to their odd behavior and leave, the caretaker pulls a file out of his desk named "Torchwood". Also, Tosh is predictably a fish-out-of-water as the only "Jap" at a 1940's soldier party, but Jack introduces her as an English intelligence officer. He also admits to Tosh that he's been in this war before.

Cut back to Gwen outside the dance hall in the present, trying to figure out her next move, when the same Bilis pops up out of nowhere and asks if he can help.

While Tosh gets the equation ready to send into the future, Jack bonds with the real Captain Harkness. It turns out that Jack, when he was still a con man, saw Captain Harkness' name on a list of the dead, and stole his identity. Because of this, he knows that his new friend will die soon — tomorrow, in fact.

Time starts slipping as the bombs start dropping and Tosh is only able to get out part of the message. She hides the remainder, this time scrawled in her own blood, in a coffee can in the bunker. Gwen finds it, but our friend Bilis scratched out the last few numbers in the interim.

Jack has urged Captain Harkness to go spend what may be his last night alive with his girlfriend. Captain Harkness stays at the party instead and gently takes Jack's hand in makeout corner.

Owen, now losing it over the prospect of getting Diane back, is willing to open the rift and risk the whole universe collapsing. Despite Ianto threatening, punching, and shooting him, the Rift Manipulator is activated.

Jack and Captain Harkness share an intimate dance. A giant blue shining time portal opens in the dance hall. Jack walks towards it, takes a good look at Captain Harkness and kisses him passionately. Everyone looks at the men making out instead of at the massive space/time rift. Captain Harkness salutes Jack, and the gang is reunited in present day. With a gaping hole in the time stream.