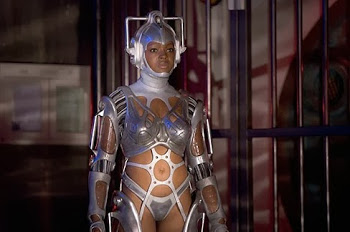 For a victim of cyber-conversion, this one is a tad too naked to appear scary. Until she starts cannibalizing innocent people.
Jack: (enraged) You hid a Cyberman within Torchwood, and you didn't tell us?! What else are you hiding from us?!
Ianto: (scathingly) Like you care. I clear up your shit, no questions asked, and that's the way you like it. When did you last ask me anything about my life?
— Jack and Ianto have a cathartic standoff
Advertisement:

Torchwood receptionist Ianto Jones has a deep dark dirty secret. No, not the fact that he despises being Torchwood's coffee boy or that he's not invited to their impromptu basketball sessions, or that's he's left behind when they all go out for drinks. No, turns out that everyone else leaving is his perfect opportunity.

After the others leave, Ianto invites an old Japanese man named Tanizaki into Torchwood's inner sanctum and leads him to a disused area of the Hub. There, we find the source of the secret: Ianto has been keeping the title Cyberwoman hidden from everyone else. This is (or was) Lisa of Torchwood One in London, a casualty of the Battle of Canary Wharf and Ianto's lover. It turns out that when the Cybermen started losing that battle, they started desperately converting new troops out of humans wholesale, without transplanting their brains at all. Having only received a partial conversion, Lisa is only partially covered in cybernetics. Tanizaki, being the world's foremost expert of cybernetics, has been called in to see if he can reverse the cybering process. Unfortunately, before the examination can begin properly, the rest of Torchwood gets called back on a routine UFO sighting, so Ianto has to leave Tanizaki with Lisa. Uh oh.

Tosh notices rather odd power drains. Ianto explains this as a generator problem and promises to take care of it. Returning to Lisa, he finds Tanizaki dead, his "upgrade" not having taken. Ianto is horrified by this but still holds out hope that Lisa can be restored. While he goes to dispose of Tanizaki, the rest of Torchwood note further power drains and come to the conclusion that they're under attack. They arm themselves and investigate. Finding the cyber conversion unit that Ianto was using to keep Lisa alive, Jack deduces the nature of the power drains. Lisa then attacks and slaps Gwen into the conversion unit. Jack stays behind to get killed a few times over and has Tosh cut off the power, sealing everyone inside the facility. Owen and Gwen duck into a tight hiding spot and have an impromptu makeout session. Ianto is knocked unconscious and saved by Jack with some extremely effective CPR consisting of a snog. Ianto explains everything to a disapproving Jack and holds out hope that she can still be human. His pleas towards Lisa only seem to confuse her about the nature of love.

A bit of a chase ensues around the Hub as Tosh struggles to get power restored and everyone else simply tries to stay alive. A rather lucky screwdriver stab by Owen weakens Lisa, then Jack uses "barbecue sauce" to summon their pet pterodactyl. Lisa thus distracted, the crew manage to escape to the surface. Meanwhile, the pizza that Ianto ordered finally shows up, and the delivery girl blunders her way into the Hub.

Jack gives Ianto an ultimatum: head back down there and finish Lisa within ten minutes, or he comes in and takes them both out. Ianto heads back in and finds Lisa's body. He breaks down until the pizza delivery girl walks in and identifies herself as Lisa. Having believed she understands "love", Lisa transferred her brain into the delivery girl, making her "human". She offers that she and Ianto be upgraded together. Ianto is unable to shoot her, so the rest of Torchwood finish the job. Ianto resumes his duties, vowing that one day, he'll stand back and watch as Jack Harkness dies. He's apparently forgiven, but just a bit broken.