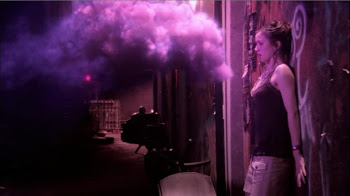 Torchwood does a first for the DW universe with the watershed out of the way- a sex monster that makes you go bang and then go boom.
Owen: Make yourself useful, sweetheart. Pass us that big chisel from the toolbox.
Gwen: Not sweetheart. Gwen. One syllable, I'm sure you can manage it.
Owen: Not sweet cheeks? Freckles. New Girl.
Gwen: It's a shame your tool's not big enough for the job. Darlin'.
— An irritated Gwen stomps on a sexist Owen's pride.
Advertisement:

Having covered Darker and Edgier and Bloodier and Gorier with the first episode, Torchwood completes the trifecta, putting Hotter and Sexier in their second episode.

Or to put it simply, Alien Sex Gas!

Gwen's date with her boyfriend Rhys is interrupted by a fiery meteor falling to Earth. She joins her new team as they begin their routine investigation into the weird glowing rock. She tries to get into the swing of the routine and the team's casual attitude, but mistakenly throws a tool, which embeds itself in the meteor, releasing a pink gas which floats away on the wind.

We now join a young lady named Carys outside a club, leaving an angry voicemail for her boyfriend. She finds herself at the mercy of the pink gas as it enters her and makes her suddenly seem much more confident. After kissing her way back into the club, she picks the nearest unlucky berk and drags him to the women's toilet. Skipping the formalities, they get right to it and have sex on camera in the public ladies' room, firmly establishing that this is not Doctor Who. He turns into a small pile of dust when he orgasms, leaving her quite satisfied.

Torchwood is called in on the unusual death and they discover CCTV footage of the event as well as Carys being possessed. Cross-referencing faces, they identify Carys and find the girl at her house, fortunately before she's able to make it with the postman.

They bring her in to the Hub and discover through testing that she's being possessed by an alien sex gas, which can entice just about anyone. Also, the alien isn't interested in any kind of conquest. It just wants to live off the energy produced by orgasm. Gwen finds the "enticing" part out a bit too late, but is saved mid-makeout-session by the fact that the alien realises she can only use male orgasms. This leads to Sex Gas!Carys enticing Owen, stripping him and running off with his swipe card.

A further check into Carys' background finds that she worked at a fertility clinic. They eventually find her there (along with several small piles of dust). With Carys about to die from having the Sex Gas in her for too long, Gwen offers herself as a host, taking responsibility for setting this whole chain of sex dusting into events. Before the sex gas can reach her, though, Jack temporarily sedates the alien by kissing it and traps the gas in a portable cell, where it dies. Gwen kisses Jack for good measure in front of everyone to thank him.