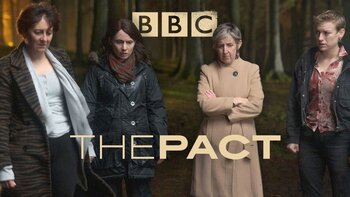 The Pact is a 2021 British Mini Series that first aired on The BBC.

In an apparently sleepy Welsh town, during a work party, abusive and much-hated brewery boss Jack (Aneurin Barnard) dies, having replaced his beloved (by everyone but him) father Arwel (Eddie Marsan). A group of women who work for him, led by policeman's wife Anna (Laura Fraser), are forced to cover up the circumstances of that night.