No Such Thing as H.R. 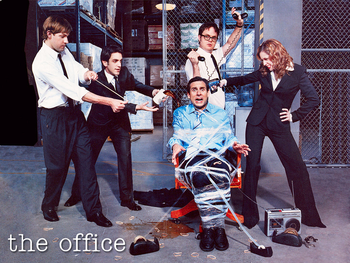 Just your average day at The Office.
Advertisement:

Life can be hard sometimes. You get up early in the morning, trudge to work, deal with loads of people who have varying opinions about you, and finally go home at the end of the day. But if someone takes out their frustrations by, say, sending you flying over the cubicles with a Megaton Punch, at least you can always go to Human Resources, tell them what happened, and have the guilty party out the door, facing a lawsuit and maybe in police custody by the end of the day. Right?

If you're living in a television show, probably not, because in fiction there is no such thing as H.R.. Whether it's the Cowboy Cop decking a paper-pushing Desk Jockey who orders him to turn in his badge, the crazy boss who's a firm believer in George Jetson Job Security, or the office's resident Psychopathic Manchild mail clerk, it seems that Violence Really Is the Answer.

If the victim's a badass hero, the Jerkass co-worker who started the fight's probably going to quickly find himself taking a dive. If it's the Anti-Hero doing the punching, expect his target, probably an Obstructive Bureaucrat, to also be a Sissy Villain. Just don't expect the situation to escalate into meetings with managers and termination notices, and certainly don't expect anyone to get arrested on assault charges.

This trope stems from a certain amount of Truth in Television, at least historically: A "Human Resources" department is a fairly recent concept, and there are plenty of historical periods when people did settle most of their disputes with fistfights or worse. It's also somewhat justifiable in settings where there's no legal system for people to turn to: fantasy heroes, hardened criminals and After the End survivors probably aren't in a position to file grievances. But if it's a modern, everyday setting, and otherwise respectable people are routinely pounding each other flat in Curb Stomp Battles, it's simply because there's no such thing as HR.

In dramatic storylines, this is used primarily to keep the character conflict and development building without having to complicate things or slow down the plot by bringing in the outside world, while in action/adventure and comedies, it's more likely to simply be all-out Rule of Cool and Rule of Funny at work.

If there is an H.R. Department, they will almost always be horrible, horrible people.

See also Fiction Is Not Fair, George Jetson Job Security, and Ultimate Job Security. Compare with No OSHA Compliance and contrast with Can't Get Away with Nuthin'. Not to be confused with Human Resources in any way. See There Are No Therapists for another industry whose absence stops people solving their problems like grown-ups.