The Chain of Harm 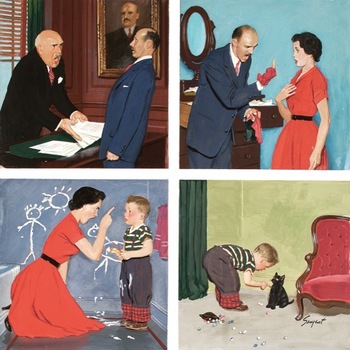 Hurt people hurt other people (and cats).
Blackadder: It is the way of the world, Baldrick. The abused always kick downwards. I am annoyed, and so I kick the cat, the cat [loud squeak] pounces on the mouse, and finally, the mouse—
Baldrick: Argh!
Blackadder: Bites you on the behind.
Baldrick: And what do I do?
Blackadder: Nothing. You are last in God's great chain, Baldrick. Unless, of course, there's an earwig around here you'd like to victimize.
— Blackadder III
Advertisement:

A very messed-up theory as a variant of typical karma. The basic premise of karma is: "Don't do something bad, because later on something bad will happen to you." This, on the other hand, is quite different.

A scenario: a man running a company is under a great deal of pressure from his superiors to produce the product faster. He's just been yelled at. Obviously, he can't talk back to his supervisor since he'd get fired, so what does he do? He yells at his normally best worker over something small. Well, the target man doesn't want to be known as a guy who beats his wife, so instead he shouts at her when something wrong happens. Because of this marital strife, she screams at her kid all the time. The kid, having no weaker human to take it out on, beats the family dog, which bites the nearby cat. And so on. The strong harms the weak, who gives similar treatment to the weaker, who then harms the next weaker in turn.

Inspired by a dynamic that's often Truth in Television, this theory has a number of assumptions:

The act of abusing someone weaker or lower-ranking than you to displace frustrations because of similar treatment from someone stronger or higher-ranking than you is often known as Kicking the Dog, but that term has a different meaning on this wiki.

Contrast to Cycle of Revenge, which directly targets the person causing harm. Compare to Revenge by Proxy, Delegation Relay, and Troubled Abuser. Breaking the Cycle of Bad Parenting is an effort to avert or defy this. If you were looking for examples of people using chains to harm others, see Chain Pain.

See also Create Your Own Villain, when one or more of the victims goes bad and hurts others as a natural consequence.

See Freudian Excuse when this is used in a villain's backstory as an explanation for their behavior now. Sometimes played as An Aesop (e.g. "Don't be mean to someone because someone was mean to you, or it will go on forever").