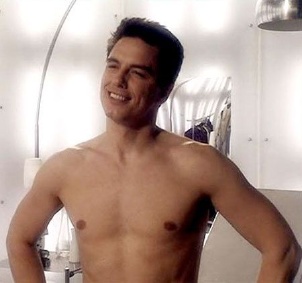 "Ladies, your viewing figures just went up!"
"You have out-gayed me, Barrowman!"
—Simon Amstell, Never Mind the Buzzcocks
Advertisement:

John Barrowman, MBE, was born on 11 March 1967 in Glasgow, Scotland (no, he's not to our knowledge a Violent Glaswegian). His family moved to Aurora, Illinois when he was 8, and his father was relocated there by Caterpillar. He picked up an American accent to avoid the torment other kids were leveling at him. Went to Joliet West High School as a teen where he performed in many school productions. Made his name as a Musical Theatre actor/singer (there's an official recording of him as Raoul de Chagny in The Phantom of the Opera available); in 1998 he received an Olivier Award nomination for playing Calvin Chandler in The Fix (he lost to co-star Philip Quast). He also presented UK kids' TV show Live And Kicking. He had several minor TV and film roles, including Soap Operas such as Central Park West and Titans. He also appeared in the laughably terrible movie Shark Attack 3: Megalodon, in which he uttered the infamous "line"

His biggest break was landing the role of Captain Jack Harkness in the revival of one of his favorite childhood shows, Doctor Who. This character, an omnisexual time-traveling con-man, was so popular he got his own show, Torchwood. He's also popped back to Doctor Who for the end of the third series and for the fourth series finale, as well as a cameo in David Tennant's final episode, and in the 50th anniversary comedy special The Five(ish) Doctors Reboot, and returning in an episode of the twelfth series and in the 2021 New Year's special.

He has been a judge for three Talent Shows (How Do You Solve a Problem Like Maria?, Any Dream Will Do and I'd Do Anything) looking for new Musical Theater stars. According to Denise Van Outen, he went skinny dipping in Andrew Lloyd Webber's swimming pool. He also took part in a talent show as a contestant - ITV's Dancing On Ice, series 1; he was voted off surprisingly early and many feel he was robbed.

In 2008, his helming of the quiz show The Kids Are All Right at around the same time he was on Doctor Who, Torchwood and I'd Do Anything, as well as his tendency to pop up in a lot of other places have led to "theories" of an army of Barrowman clones running around. Also in 2008, he featured in Hotel Babylon, where he played a Hollywood producer.

In 2010, he had a part on Desperate Housewives as Patrick, a Neo-Terrorist, who had a rather "explosive" end. In 2012, he appeared in the Green Arrow adaptation Arrow in a recurring role as Malcolm Merlyn, the Dark Archer and leader of the Undertaking. He continues to appear on the show and its spinoffs, ping-ponging between omnipresent Big Bad and Anti-Villain.

He's released several CDs, mostly of Broadway standards. He also has two autobiographical books out: Anything Goes and I Am What I Am, alongside working in fiction with his sister Carole, a Torchwood novel called Exodus Code, three Torchwood graphic novels, and a children's series called Hollow Earth.

He's openly gay, though he acknowledges women can be attractive (even if he dislikes the idea of sex with them)note In his memoir Anything Goes, he remarks that a female college friend of his was "absolutely gorgeous", then in a footnote says, "I'm gay, not blind.". He and his long-term partner Scott Gill were joined in a civil partnership

on 27 December 2006 and got married in the state of California on 2 July 2013 (incidentally, Barrowman has stated that he took one look at Scott and knew he was the one). He was actually considered for the role of Will from Will & Grace, but since Reality Is Unrealistic, he wasn't considered "gay enough" by producers and the role was given to a straight actor.

His appeal has reached the level of internet memes, both as a sex symbol and in original flavor. Thanks to an appearance by David Tennant on Never Mind the Buzzcocks, it's become standard procedure for Whovians to blame any random thing that's bothering them on BARROWMAN! *shakes fist*

He used to have a dog called Tegan (after a companion of the Fifth Doctor), and he currently has a dog named Captain Jack. Barrowman has run into slight difficulties in the "Me Too" era as he previously was known for occasionally humorously exposing himself on set as a prank, but has escaped serious backlash due to the last incident being over a decade ago and none were meant in a sexual context.