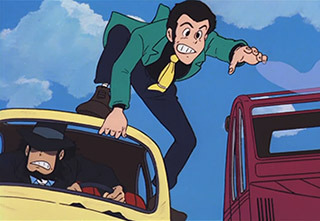 Two (or more) characters are in a car. Suddenly, we realize that they're being followed, or they pass by something or someone important, or there's a hostile tank right in front of them... something that needs taking care of, right now. So, without warning, the driver tells his passenger to "take the wheel" and does whatever needs doing, often leaping out of the car entirely while the hapless sidekick struggles to keep the vehicle under control. For extra humor value, have the passenger be in the back seat, or have them literally take the wheel.

May overlap with High-Speed Hijack.