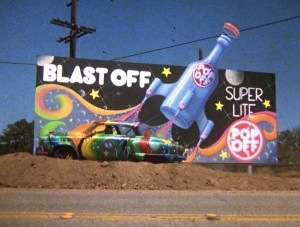 Ahh, a bear in his natural habitat — a Studebaker.
Frank Devereaux: Now, I'd lay low, 'cause I love life and its infinite mysteries. But you two want to be dumb, that's fine. At least have the common sense to ditch your car.
Dean Winchester: Wh—uh, excuse me—what?
— Supernatural, "Slash Fiction"

In Real Life, fugitives would most likely use inconspicuous-looking vehicles to travel around; otherwise, they'd be recognized and caught very quickly.

Not so in fiction.

If your protagonists, Alice and Bob, are of the Anti-Hero variety, they will drive a rare and/or unique-looking vehicle in order to show how utterly badass they are. Somehow, the authorities never think to look for their pink-and-green SUV or purple-striped Ferrari, though ordinary Muggles might if Alice and Bob are the We Help the Helpless types of anti-hero.

A subtrope of Cool Car and Unusually Uninteresting Sight. This trope is about how that kind of vehicle should be a liability precisely because it is so rare and/or unique, but somehow never is. A Cool Car can be cool and not fall under this trope (like Angel's Plymouth, for example) — keep that in mind before adding an example.

Named for the somewhat-rare 1967 Chevy Impala four-door (a.k.a. The Metallicar) that Sam and Dean Winchester drive on Supernatural; somehow, the authorities never mention their car when they send out alerts to catch them, even though this would definitely help increase the possibility of tracking them down.

For added unsubtlety, it's a Lamborghini Murciélago — meaning "bat".