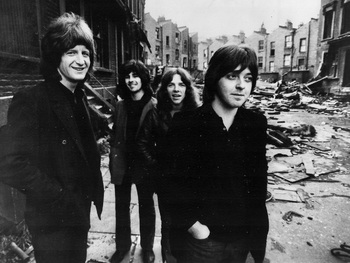 Founded in Swansea and originally known as The Iveys, Badfinger rose to prominence after being signed to The Beatles' label Apple Records. After releasing an album as The Iveys, the group renamed to Badfinger and recorded songs for The Magic Christian. From this film came a chart-topping single, "Come and Get It", written by Paul McCartney.

After this, a string of hit singles (among them "No Matter What", "Day After Day", and "Baby Blue"), followed on Apple before the label folded and the band moved to Warner (Bros.) Records. Unfortunately, due to the antics of their business manager Stan Polley, the band earned little money from their troubles. They eventually realised this and turned on him, but it was too late. The band became mired in lawsuits, failed to get their earnings, and lost their commercial standing and income. The resulting mess led Pete Ham to commit suicide in 1975, and the band broke up. They reformed three years later, tried to recover, and released two more albums. But Tom Evans never got over Ham's death, and he eventually took his own life in 1983. Badfinger are generally better known today for their tragic history than their music, although they are still one of the more famous Power Pop acts of the early '70s and their hits continue to get airplay on classic rock radio.