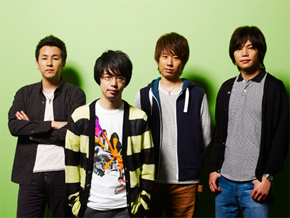 L - R: Yamada, Gotoh, Kiyoshi, and Kita.
Knowing that memories are things,
That don't remain in eternity,
I kept scratching my head,
And cried in the corner of my heart,
Days I asked you not to lose,
That passed by below the elevation,
I regret them- I missed the chance to tell you that day
"Re:Re:"
Advertisement:

Asian Kung-Fu Generation is a Japanese band formed in 1996 by Masafumi Gotoh (lead vocalist and rhythm guitarist), Kensuke Kita (lead guitarist and backing vocalist), Takahiro Yamada (bassist and backing vocalist), and Kiyoshi Ijichi (drummer). The band is critically acclaimed and commercially successful in Japan. Their popularity peaked around 2004-2007, but they are still doing well. Fans call them Ajikan, AKG, or AFKG for short.

They host the Nano-Mugen Festival each summer. Musicians and bands from Japan, America, and the UK come to perform; each act contributes one song to make up a compilation album released to advertise the festival. Some previous acts include Spitz, Chatmonchy, Beat Crusaders, Ellegarden, Third Eye Blind, Unicorn, and Ben Folds.

Outside of Japan, they are best known for their songs "Haruka Kanata", "Rewrite", and "After Dark", which were used as opening songs for the Naruto, Fullmetal Alchemist, and Bleach anime respectively.

The band has released 8 studio albums and five EPs.