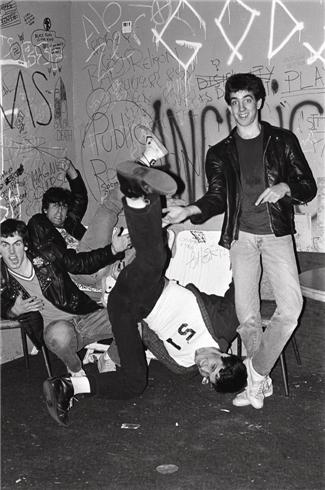 Punk Rock with a thesaurus.

Bad Religion is a very influential American punk rock band, founded in 1980 in Southern California. The original members were Jay Bentley (bass), Greg Graffin (vocals), Brett Gurewitz (guitars), and Jay Ziskrout, who was quickly replaced by Pete Finestone (drums). In the spirit of the Do-It-Yourself ethic held by the punk scene at the time, Gurewitz created Epitaph Records soon after their formation, and most of the band's albums have since been released through this label.

The band is known for its particularly clever use of metaphor, style and vocabulary in the lyrics, as well as their peculiar vocal harmonies. Lyrics are often about philosophical, social or political concerns and tend to be critical, sarcastic, and often times harsh. Song writing is usually done between Graffin and Gurewitz, except for the period of time when the band left Epitaph for the major label Atlantic Records (1993-2001).

During this period, Graffin took on sole song writing duties (excluding their major label debut Stranger than Fiction, which was the last album Guerwitz appeared on until 2002). For the album No Substance, generally considered among the band's weakest entries, song writing responsibilities were shared among the other band members. Since Gurewitz's return, he and Graffin have resumed their original song writing duties.

Since 2001, Bad Religion's lineup consisted of Graffin (vocals), Gurewitz (guitars), Bentley (bass), Greg Hetson—formerly of The Circle Jerks (guitars), Brian Baker (guitars), and Brooks Wackerman (drums). Bobby Schayer was their drummer for much of their 1990s period, but left the band after suffering a shoulder injury. In 2013 Hetson left due to personal problems (divorce) and was replaced by Mike Dimkich. In 2015, Wackerman also left to join Avenged Sevenfold. He was replaced by Jamie Miller.