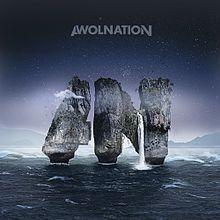 Awolnation (usually stylized as AWOLNATION) is an American alternative/electronic rock band from Los Angeles, formed by the former lead singer of Under the Influence of Giants, Aaron Bruno. They are signed to Red Bull Records. They are best known for their 2011 song "Sail", but their songs "Burn it Down", and "Kill Your Heroes" are also well-known. Their songs have been used in commercials, movies, and TV shows all alike. Most notably, their song "Sail" was used in promos for, appropriately enough, Vikings.