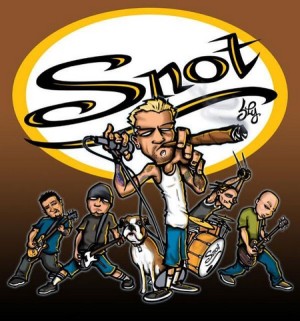 A Hardcore Punk and Funk Metal band from Santa Barbara, California, which formed in 1995, and got a lot of attention, controversy and an underground following. They released an album, Get Some, and toured with Ozzfest. A well known incident early in the band's career involved band leader, singer and founder Lynn Strait being arrested for indecent exposure during a concert where he emerged naked from the oversized prop toilet used in Limp Bizkit's concerts.

Despite this incident, things seemed to be going well and the band started recording a second LP. After Strait died in a car crash, along with the group's mascot, Strait's dog, Dobbs, the band broke up in 1998. As a result of the good relationships the band developed with a lot of major rock stars, they released Strait Up as a tribute; it featured lyrics and vocals written and performed by members of major-name rock, punk and metal bands, including System of a Down, Korn, Hed PE, Soulfly, Rich Kids on LSD, Incubus, Sevendust, Limp Bizkit, Coal Chamber, Slipknot, Sugar Ray and Ugly Kid Joe. The album also featured completed versions of some songs intended for the band's second LP. This album, and the live album Alive! sold better than the group's debut LP.

Much as Sublime had done, Snot reformed in 2008, with the original line-up and former Divine Heresy singer Tommy Vext as the band's new vocalist. Unlike Sublime, which kept its original sound upon reformation, Snot completely changed their sound, becoming more Heavy Metal-oriented. The new sound and the band's naming caused some friction among Snot fans, and this line-up soon broke up, leading most of the band to form the new band "Tons", which returned to Snot's Punk Rock roots, and featured Brandon Espinoza on vocals.