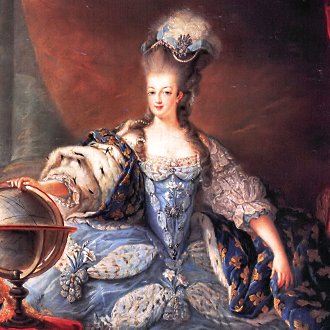 All quotes pertaining to the consumption of cylindrical baked goods are to be taken with a grain of salt.
Advertisement:

Queen Marie Antoinette (2 November 1755 – 16 October 1793), born Archduchess Maria Antonia Josepha Johanna von Habsburg-Lothringen, is known as the queen who led a tragic yet romantic life, who spent more time on her own pleasures than being a responsible royal, who was obsessed with fashion, pageantry and the Ermine Cape Effect; who was the subject of scathing cartoons and scandals and who eventually lost everything she held dear during The French Revolution. Today, she's best known for saying "let them eat cake," which she never actually said.

Her childhood in the Habsburg (Austrian) empire was excessively pampered and free spirited. This did not prepare her for her eventual life in Versailles. As the fifteenth of sixteen children she was certainly not brought up as might befit a future occupant of the greatest European throne of its time, in regards to either education or life experience. On October 13, 1762, she met Wolfgang Amadeus Mozart when he performed for her family. There was a long-standing rumor that after he tripped and she helped him up, he fell in love with her and begged her to marry him even though they were only children. She was sent to France only after a series of misfortunes took her older sisters out of the running. In the interim, many Austrian court customs had been discarded as too stuffy by her mother, the Empress Maria Theresa. Antoinette (as she was known) tried to impose this same openness on Versailles, and brought with her an overall distrust of the intensely rigid formal etiquette which characterised the French court. Such youthful optimism is understandable to a modern audience, but she was seen as a legitimate threat to the prestige of many powerful courtiers in Versailles, many of whom were already uneasy about this representative of France's ancient enemy. France's governmental system may have glittered outwardly, but its rapidly decaying core of greed and self-interest made for a complex maze that even the most astute princess might have had trouble negotiating. And astute Antoinette was not. It didn't help at all that she was stuck with a heavy, lumpish husband who openly preferred the company of the palace workmen over hers (told that he shouldn't eat so much at his wedding night banquet, the future Louis XVI responded, "Oh, I always sleep better after a good supper."). Lonely and neglected, trying to shut out the mockery over her nonexistent sex life, the teenage princess embarked on the whirl of gaiety that became her legend.

Partying till all hours, gambling, private theatricals, wildly extravagant jewels and clothes, ludicrous hairstyles... basically, whatever new fad came down the pike, Antoinette was up for it. Including, most unfortunately, the one for simplicity and rusticism. This sounds quite banal now — and in fact, was no more then than an expression of a newly emerging general trend, and perhaps even a little less excessive than that of other noblewomen — but in the moment, an ostentatiously realistic model of a peasant village (minus the starving, over-taxed peasantry), where the Queen and select noble friends could kick back and dress down every now and then, was just asking for trouble, especially in the late 1780s when a famine and a rapidly escalating financial crisis was about to clear the ground beneath the feet of the entire monarchy.

Before the Revolution, and in the early years of that movement, Marie Antoinette's perceived vapidity and excesses made her a favorite target for satirists both in France and England. They were the tabloids of their day. Censorship prevented major newspapers from making open political criticism on the person of the King and the Church, but if tabloids reported on gossip and rumor of Marie Antoinette then it fell Beneath Suspicion, allowing them to use the Queen as scapegoat to give vent to all kinds of frustration and dissent. Naturally, some of the stuff they wrote were outright made up: If she organized an innocent ride into the country to watch the sunrise, it was construed as an orgy. If she indulged in close female friendships, they were naturally lesbian; if she showed favour to certain male courtiers, they were naturally her lovers. All France "knew" of the insane amounts she spent on frivolities, when she was really no more extravagant and much less promiscuous than other members of the family, and likewise, her marriage with the shy King improved — she eventually gave the nation two heirs. Antoinette's political influence in the Ancien Regime, however, was close to nil because her husband's ministers distrusted her so much. Throughout her reign her mother criticized her for not representing the Empire well enough, while any attempts she did make ensured further scorn from the French, who soon dubbed her L'Autrichienne — a multi-layered Pun which in Frenchnote French, unlike English has masculine and feminine forms for various nouns, so this pun is literally untranslatable combined the feminine form of "The Austrian" ("L'Autrichien"), the French word for Other or Foreigner (autre) and the feminine form of "Dog" ("La chienne") and using it to refer to her by this nickname was a form of subversion.

Some incidents damaged her reputation, including her supposed invocation of "let them eat cake" in a time when bread was scarce and expensive. There is no record of her giving utterance to such a phrase in the callous manner as this quotation implies.note The earliest written record of the phrase attributes to an anonymous "great princess", and dated to when Marie Antoinette was just 9 years old and had yet to set foot in France. Modern historians believe that if the quote was genuine at all it was likely spoken by Louis XIV's wife Maria Theresa of Spain, over 100 years before Marie Antoinette became Queen of France. Likewise, "The Diamond Necklace Affair," in which a prominent courtier was tricked by a conman into buying the priceless trinket under the impression he was doing the Queen a discreet favour, finally did in her waning public popularity. Even though there was no proof of her involvement, her reputation was so bad that nobody doubted it. The nobility that might have been her natural allies were more than happy to use her as a figurehead to distract critics from their own follies.

Ironically, Marie Antoinette, so marginal in the years before the Revolution, became a key figure of Royalist Opposition. The Queen was determined at all costs to preserve the Ancien Régime both in principle and for her young son. She was appalled at such flouting of Royal Authority as the Tennis Court Oath and was filled with fear during the Women's March to Versailles, where Parisian market women arrived at Versailles and demanded the Royal Family take residence at the long-abandoned Palais des Tuileries, and whose retinue comprised of members of the National Guard (drawn from Parisian Radicals). In addition to feeling imprisoned by the Revolution, she felt humiliated at seeing the King present himself at the National Assembly. The King was himself unhappy about these changes, but he was weak-minded and vacillating. His Queen proved to be more strong-willed. Marie Antoinette played a key role in planning the daring escape from the Tuileries. With the aid of her loyal favourites Count Axel von Fersen and the Baron de Breteuil, she organised a scheme in which the royal governess would be disguised as a Russian noblewoman simply travelling through the countryside, with the royal family in tow as her children and servants. They were in actuality headed north to a Royalist region where 10,000 of the remaining loyal soldiers were waiting. It is speculated that their ultimate destination may have been, of all places, Pennsylvania in what was becoming the United States. A settlement known as French Azilum

had been established in the northern part of the commonwealth, meant to give escapees loyal to the French King a place to start a new life, and lodgings (Le Grande Maison) had been constructed for the royals if they could only manage to reach the location.

Unfortunately, everything fell apart about two-thirds of the way there, at Varennes, when a local official recognised the King from his likeness on a coin. This revelation of the King's Flight led to a humiliating return back to the Tuileries, and the French public who had liked the King for supporting the Revolution now saw him as a liar and a traitor. In this period between the Flight to Varennes and the Birth of the Republic, Marie Antoinette tried to ensure the family's survival by playing Revolutionary factions such as the Feuillants (whose leader, Antoine Barnave, was manipulated by the Queen into excusing the Flight to Varennes and clamping down on anti-royal sentiment) and the Girondins. Antoinette was supportive of the drive to a war with Austria, her own native place, in the hope that a military defeat would restore the Absolute Monarchy. note Her brother Leopold II was actually opposed to the war and critical of his sister, but he died in early 1792.

This all ended with the 1792 Insurrection, the Storming of the Tuileries and the Declaration of the First Republic. The King and Queen took refuge at the National Assembly, now called National Convention and were imprisoned at the Temple Fortress. The King was brought to trial, declared guilty and executed, in January 1793. His widow was brought to La Force prison, separated from her children, the Dauphin ("Louis XVII" for Royalists) and Marie Thérèse, Madame Royale, and her sister-in-law, Madame Elisabeth. Initially, Danton and Robespierre had hoped to ransom her to the Austrians in hope for a peace agreement, but all their overtures were rejected. Eventually, the Parisian Mob, who loudly clamored for the trials and executions of all traitors, got their wish. Marie Antoinette was brought to a trial, which was less a case of justice at her actual crimes (treason) and more a ritual of humiliation with wild misogynist allegations and insults flung at her by populist demagogues. Eventually, she was guillotined in the month of October during the Reign of Terror. Her son was left in the care of a cobbler and his wife, was raised poorly and shortly thereafter died of malnutrition, depression or the shock of the change in habit and lifestyles, nobody is quite sure. Her daughter survived and was eventually exchanged as a hostage and lived a long life. She would live to see the Bourbon Restoration and the return to honour of her parents. The Bourbon and Orleans Restoration led to a period of revisionism where writers who formerly criticized the Queen now looked at her with Nostalgia Filter and Rose-Tinted Narrative.