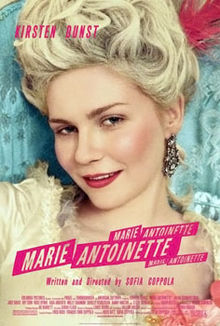 Marie Antoinette is a 2006 film by written and directed by Sofia Coppola, loosely based on the life of Marie Antoinette (played by Kirsten Dunst). The film follows the fifteen year old princess on her way to the French Court to be married to Louis XVI, her reign as queen, and through the beginning of The French Revolution, when she and her husband were forced to relocate to Paris