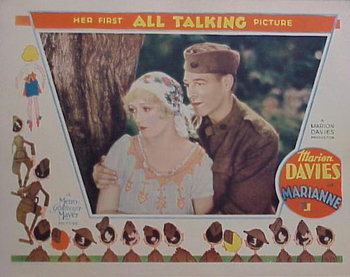 Marianne is a 1929 film directed by Robert Z. Leonard, starring Marion Davies. Davies starrs as Marianne, a peasant farmgirl in a little village in France. The film opens on August 3, 1914, as Marianne says goodbye to her boyfriend Andre, who is going off to fight in World War I. The film skips ahead four years, to after the war, when an American platoon is occupying the bombed-out ruins of Marianne's village. Marianne is hosting the soldiers while desperately trying to fend off their amorous advances. One of them, Private Stagg (Lawrence Gray) is particularly persistent, and eventually Marianne finds herself falling in love with him. Their blooming romance is complicated when Andre, who was blinded during the war, comes home from a German POW camp.

Marianne was made twice in 1929, once as a silent and once as a talkie. The casts were completely different except for Davies, who starred in both versions. This page is based off of the talkie version.