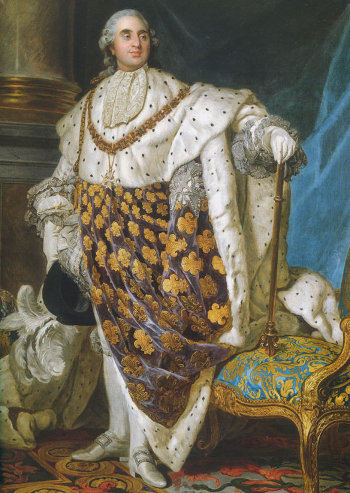 Louis XVI in 1777 by Joseph-Siffrein Duplessis
Sieyès, who had voted for death, once told Napoleon that Louis XVI was a tyrant and deserved to die: "M. l'abbé [Napoleon snapped], if he had been a tyrant I would not be here, and you would still be saying mass."
— David P. Jordan, Napoleon and the Revolution.
Advertisement:

Louis XVI (23 August 1754 – 21 January 1793) was the King of France and Navarre from 1774 until 1791. Upon accepting the 1791 Constitution, he became "King of the French"note A title that would be revived in the July Monarchy until the 10 August 1792. He became king as a young man (20 years of age, which was still older than his three immediate predecessors, who became king at nine, five, and five, though it took them some more years to fully assume power of course) and his reign coincided with The Enlightenment, the Industrial Revolution, The American Revolution and The French Revolution.

The grandson of Louis XV, the Dauphin Louis Auguste inherited a system of absolute monarchy. All power was centralized in Versailles and invested with the personality and majesty of the King. The problem with this system was that it needed a ruler to have special fortitude and political genius. Coupled with this, Louis XVI wasn't raised to be the successor. Indeed he was neglected in his childhood in favor of his handsome older brother, Louis, Duc de Bourgogne. The death of his brother at the age of nine placed him next in line of succession. As a Prince, he had been noted for being physically active, constantly at ease at outdoors as well as being highly fit. He was also well educated in history, geography and literature, and was able to speak several languages. At the age of 15, he married the 14 year old Marie Antoinette. Being personally quite timid and introverted, he didn't consummate his marriage with her at first. This fact led to quite a scandal at Versailles and Louis XVI was subject to much scorn and ridicule for being so prudish, which was considered highly unbecoming of a French King, especially in light of his predecessor Louis XV le bien-aimé. More seriously, not consummating the marriage meant no heir in sight, which was a great political and diplomatical problem. They consummated their marriage in due course of course and had four children. They never really fell in love but came to deeply care for each other as wife and husband as years passed.

Initially, Louis XVI was quite open to new ideas and embracing some of The Enlightenment reforms. Where his precessor had brutally shut down the parlementsnote Though parlements proved shortly before the Estates General to be only interested in keeping their privileges, not really any political reform, and even less social reforms and railed against any reforms whatsoever, the King wanted to be popular and lessen some of the malcontent against his rule. In 1787, He signed into place the Edict of Versailles, which ended 102 years of Catholic subjugations of Protestants and Jews under the noxious Edict of Fontainebleau, giving them legal rights and civil status, a primitive form of reform that paved the way for the more decisive initiatives of the Revolution. The King's financial advisors — Malesherbes and Turgot — however faced opposition when they tried to put new taxes on the nobles, who despite having the money did not want to pay. Indeed, it was for reasons of solving a growing economic crisis and issuing monetary reform that Louis XVI convoked the meeting of the Estates-General in 1789, the first time in 150 years. This decision gave political representation and brought on to the national stage a generation that was as young as the King and with comparatively little political experience. The corrupt nobility and clergy regarded the King's reforms with scorn and they urged him to sideline the Third Estate, this led to the Tennis Court Oath and the forming of the National Assembly. A decision to send troops to Paris triggered the Fall of the Bastille and the real beginning of Revolution.

The Revolution was regarded by the nobility and the royal family as, understandably, an existential threat. This became even more clear after the Women's March to Versailles (October 1789), which brought the King to the long abandoned Tuileries Palace in Paris. This event made him a virtual prisoner to the National Guard, most of them drawn from Parisian radicals. The King was placed in virtual house arrest with his wife and children, under constant scrutiny. In the early years of the Revolution, the reformists and the people regarded Louis XVI as a good man, surrounded by bad advisors and they tended to scapegoat the Queen as power hungry. Some of them (Mirabeau) even went behind the backs of the Constituent Assembly to provide advise to the King on becoming a more popular monarch. This fiction ended with the Flight to Varennes, where Louis and his family tried to escape the Tuileries but not before sending a letter denouncing his treatment and the trajectory of the Revolution. He failed and was brought back to Paris but with his popularity in tatters.

The Constitution of 1791 which the King subsequently accepted gave him a suspensive veto on most state decisions as well as insisted that the King was inviolable. This ended with the Storming of the Tuilleries. The Royal Family took support with the Legislative Assembly who subsequently declared a Republic, the result being that the King was no longer protected by any laws, paving the way for his execution.

His death by execution marked the end of the Ancien Régime, absolute monarchy, and feudalism. It was also the death knell of the Divine Right of Kings as a concept of sovereignty, at least in Western Europe (it would hang on in Russia for another century, but that ended even worse).