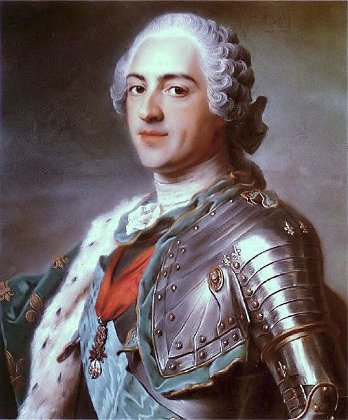 Louis XV in 1748, by Maurice Quentin de La Tour
Après moi, le déluge.note "After me, the Flood."
—Louis XV to the Madame de Pompadour (or perhaps her to him. Or perhaps neither, but whatever, it fits.)
Advertisement:

Great-grandson of Louis XIV and King of France for 58 years (1715-1774). He ascended to the throne after the deaths of his older brother, father, grandfather (Le Grand Dauphin) and of Louis XIV himself.

If Louis XIV was "Le Grand", Louis XV (15 February 1710 – 10 May 1774) was "Le Bien-Aimé" (the Well-Beloved), at least at first. He started well enough after a war with England and Austria but it all went wrong when he ceded hard won territory back to the latter. He even went so far as to seek with an alliance with Austria. This would have dire consequences for his successors.

His popularity with the common man waned as well because of his promiscuity which led to all sorts of wild rumors. Things got worse later in his reign when France lost North America and India to the British in the Seven Years' War. This made him a morose and bitter man. In his old age, he abolished Parlements which his grandson and successor Louis XVI re-established.

He died of smallpox at age 64.