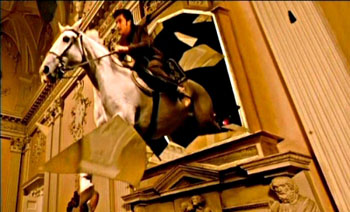 Hi-yo, Arthur! Away!
Madame de Pompadour: Oh. This is my lover, the King of France.
The Doctor: Yeah? Well, I'm the Lord of Time.
Advertisement:

The one where the Doctor gets an android drunk.

Hold on to your hearts — king of nightmares Steven Moffat is in the writer's seat. This episode was nominated for a Nebula and won a Hugo.

You don't need to dangle a juicy plot hook like that in front of the Doctor twice. Why the little girl's room is hooked up to a spaceship 3000 years in the future and a few galaxies away, the Doctor doesn't know. He also doesn't know what poor little Reinette has done to warrant being followed around by masked, grinning, desperate clockwork robots, but he chases them out from under her bed and back aboard the spaceship. note Repeating his Badass Boast from Steven Moffat's early short story "Continuity Errors": — "What do monsters have nightmares about?" - "Me!" — which was in turn based on Paul Cornell's "Love and War".

On the other side of the fireplace, the little girl ages years each time the Doctor steps through — even pleasantly surprising him with a makeout session once she's old enough — and eventually becomes Madame de Pompadour, the elegant and accomplished courtesan who was mistress to King Louis XV. After the Doctor saves her from another droid, he finally figures out what's going on: the spaceship they came from was badly damaged during a space storm and the droids are simply the ship's repair crew, trying to fix the damage with the few spare parts they had available. During the conversation, the droid reveals a detail that Rose and Mickey have already discovered: the robots were overzealous in their maintenance tasks, and since they didn't had enough spare parts, the organs of the ship's missing crew have been repurposed as sources of ship repair parts. For some still unexplained reason, the droids have decided that Madame de Pompadour's brain would make a fine addition to the ship's navigational system.

However, they want her brain at a particular point in her life, which means that they have to waste enough time opening and closing doors while the Doctor tries to piece together what's going on. Madame de Pompadour, meanwhile, grows to love the Doctor, and is very quick to understand just what he is and how he can be in her bedroom at all those different points in her life. When he gently scans her brain for any information he can find, she unexpectedly uses the open mental link to explore his mind in turn — once again pleasantly surprising the Doctor, but finding nothing that can protect her from the inevitable entrance of the robots later on in her life. She does ask him something tremendously important: "Doctor who? It's more than just a secret, isn't it?"

When Mickey and Rose appear to her, years later, she decides to find out what the Doctor's world is like. So, dressed in her elaborate Versailles gown, she simply ignores them and steps through the open door and into the spaceship. From a distant open portal elsewhere on the ship, she can hear her future self screaming in despair. There's nothing she can do for now, and she resigns herself to waiting in fear in her own world.

When the droids finally appear, again years later, the Doctor makes a tremendously grand entrance — smashing through a mirror, on a white horse, into a Versailles ballroom. (Which incidentally, after much deliberation, was deemed literally impossible by the production team. When they told Steven Moffat, he broke down and cried like a child, and so the production team decided to film it anyway.) By doing so, however, he destroys the portal and consigns himself to a life on The Slow Path together with Reinette.

Until she shows him her painstakingly-reconstructed childhood bedroom, whose fireplace is still linked to the ship... The Doctor leaves, but promises to take her along to the stars, and tells her to wait two minutes.

Two minutes later, when the Doctor comes back, years have passed in Versailles and Reinette has died of illness. King Louis hands him a letter, which the Doctor silently walks off to read.

Just before they leave in the TARDIS, Rose wonders why the robots would have wanted Madame de Pompadour. The Doctor states that he doesn't know, it could've been anything, and they leave. Then comes The Stinger. The TARDIS dematerializes to reveal a portrait of Reinette on the wall, and the camera pulls out, revealing the name of the spaceship: S.S. Madame de Pompadour.

Alternative Title(s): Doctor Who NSS 2 E 4 The Girl In The Fireplace