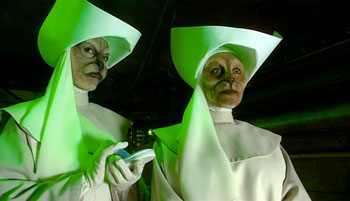 The one where the Doctor fondles himself. Sorta.

The message leads the Doctor to a hospital run by cat nuns, but that's not even the strange part. There's a guy who's turning into stone, but even that isn't the strange part. Among all the cat women and the people Taken for Granite, what's peculiar is that the hospital is too far ahead of its time: they have cures for diseases that haven't been cured yet.

The Doctor is on the case! In the ward, he and Rose meet the apparently dying Face of Boe, the oldest being in the galaxy. The Face is dying of old age, which is the only thing the cats cannot cure. Novice Hame, the Face's nurse, tells the Doctor about a legend that the Face of Boe, just before he dies, will tell his last secret to someone like him — "the man without a home, the Lonely God."

Rose, meanwhile, runs into Lady Cassandra (Remember her?), who wants her body. Literally. Using a psychograft, she snatches Rose's body and mind, and quickly realizes that a) Rose likes the Doctor! b) the Doctor is the Doctor! c) the Doctor is hot! d) a good old-fashioned makeout session is called for, and e) Rose is a chav! The Doctor doesn't mind at all.

So the Doctor and a Cassandra-possessed Rose stumble upon the source of the cats' medicines — a secret colony of artificially grown people, who are held prisoner and infected with everything in order to manufacture cures for everything. The clone-people get out, the Doctor figures out that Rose is not quite herself, and Cassandra is forced to switch back and forth between the bodies of the Doctor and Rose during the ensuing chase. While David Tennant camps it up as Cassandra (and Billie Piper tries very hard to keep a straight face), Cassandra at one point ends up in the body and mind of one of the sick, and is severely shocked to realize what it's like to really suffer.

The Doctor gets baptized by the nuns with a panacea cocktail and, with a touch, disinfects the clone-people in a scene that would make Jesus Christ himself jealous. It's not the last time the Doctor will be a Messianic Archetype on this specific planet. Cassandra goes into the body of her dying servant, where she finally dies in her own arms through a bit of foreshadowed time-travel. The Face of Boe, meanwhile, decides that he could stick around for a bit longer after all, and promises to get back to the Doctor later on that big-important-secret-to-be-imparted-to-the-Doctor-at-the-time-of-the-Face's-death thing.