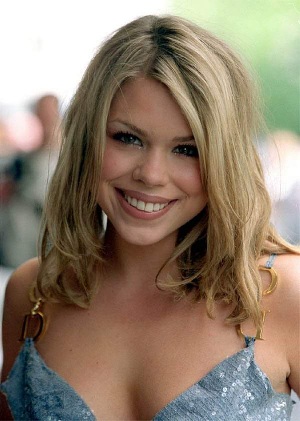 "There's not enough money in the world to get me singing 'Because We Want To' again."
Advertisement:

Born in Swindon, Billie Paul Piper (born Leian Paul Piper, September 22, 1982) is the only full time Doctor Who companion to have three UK Number One hits to her name. She is notable for her dyed blonde hair, big black eyebrows and being a Fox. Literally, as she married Laurence Fox in December 2007. With him, she has two sons, Winston James and Eugene Pip. They divorced in 2016, however.

She started out as an actress, but moved into singing, with "Because We Want To" making her (at fifteen) the youngest singer to debut at No. 1. After two more, her star faded somewhat — but in the middle of a lot of chaos, she married British presenter Chris Evans (no, not that Chris Evans). The marriage lasted for years and the two remain good friends.

In 2003, she returned to acting, appearing in a modern version of The Miller's Tale (from The Canterbury Tales). In 2004, she was cast in the revived Doctor Who as Rose Tyler, one of the many companions, and the first one when the TV show returned from its hiatus in 2005. She reappeared as Rose after her 2006 departure in the last three episodes of the 2008 season, made a cameo in David Tennant's final episode, and portrayed "The Moment", the sentient interface of the weapon the War Doctor used to (supposedly) destroy Gallifrey in the 50th Anniversary episode, "The Day of the Doctor".

After her departure from Who, she's appeared in some other things, most notably as Sally Lockhart in two film adaptations (alongside Matt Smith, which should give rise to some interesting shipping fanvids). That and Secret Diary of a Call Girl (where Matt Smith also showed up... hoo boy). Billie Piper's first non-BBC TV role was as the star of ITV's adaptation of Mansfield Park. She gave a critically-praised performance in Neil La Bute's play Reasons to Be Pretty, and made her debut at the National Theatre in The Effect. She subsequently starred in the Showtime Gothic Horror series Penny Dreadful as tubercular sex worker Brona Croft, who after her death is reanimated as the Bride of Frankenstein. In 2016-7 she reached new heights of critical praise as a theatre actor, in the very demanding main role of Federico García Lorca's play Yerma, winning just about every British stage acting award and several American ones, and giving her the distinction of being the only actress to have won six out of an available six Best Actress awards in British theatre for a single performance.note Critic's Circle Theatre Awards, Drama Desk Awards, Drama League Awards, Evening Standard Theatre Awards, the Lawrence Olivier Award, the Whatsonstage.com Awards, the Broadway World Theatre Awards, and the Glamour Award She grew beyond acting with the romantic black comedy film Rare Beasts, which she wrote, directed, and played a major role in. In 2020 she co-created the TV series I Hate Suzie with the Secret Diary of a Call Girl main writer Lucy Prebble, in which she played an actress whose life spirals out of control after a sex-tape scandal — many reviewers noted the parallels between the fictional Suzie's career and Piper's own.

Billie Piper also appeared on Top Gear as a "star in a reasonably priced car," where she confessed a love of classic cars and then drove round the track in an impressive 1 minute, 48.3 seconds.note She did cut corners though. A lot. David Tennant complained about it during his appearance. A lot. Jeremy Clarkson responded by citing the transparent shirt that she was wearing at the time.