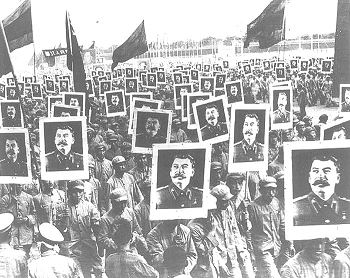 Comrade Stalin's 50th birthday celebrations.
"Please, gentle Eva,
Will you bless a little child?
For I love you,
Tell Heaven I'm doing my best,
I'm praying for you,
Even though you're already blessed."
— "Santa Evita", from Evita by Andrew Lloyd Webber and Tim Rice
Advertisement:

A cult of personality refers to the massive adulation of a political or historical figure. The Other Wiki defines it as "when an individual uses mass media, propaganda, or other methods, to create an idealized, heroic, and, at times god-like public image, often through unquestioning flattery and praise." Often the subjects of cults of personality are treated as gods, held responsible for the good things affecting a country, policies are tied to a certain figure and epoch. The cult may often claim outlandish accomplishments for the subject in order to bolster their popularity. On the other hand, heroic stories about the subject's life may be endlessly repeated in order to reinforce the cult.

Cults as frequently represented in fiction are self-created but in practice, cults can also be developed independently of the subject's active will and desire. After a person's death, the new cult is hijacked by parties or other factions so as to claim a certain tradition, which otherwise does not really exist in the present for them to claim, and so give their new and fresh ideas an aura of legitimacy and continuity in the eyes of the people, who otherwise would see the new team as merely a political outsider and new upstart. Cults often derive from new regimes and revolutions. It is also present in the kingdom and The Empire where a new ruler, if he is an Unexpected Successor, The Conqueror, The Usurper, or *gasp* a woman, would need to go out of their way to make their ideas presentable and acceptable to the people with memories of the Ye Goode Olde Days before this upstart with their fancy new ways arrived. In this manner, a cult of personality is merely a highly cunning PR stunt.

The word "cult" is usually used to refer to a small religious group, but it can also mean "devotion to a saint" in Christianity and this is where the phrase comes from. It was first used in a political sense by Karl Marx, but was popularised by Nikita Khrushchev when he denounced Stalin in 1956. It is also distinct from state-sponsored cults and government enforced religious policies and reforms. A Cult of Personality is distinctly political in character and is usually identified as a common feature of 20th Century dictatorships such as Nazi Germany, North Korea, Maoist China and Stalinist Russia.

When the ruler running a Cult of Personality takes one step further to declare themselves a god (where they may or may not literally become one), it may result in a God-Emperor.