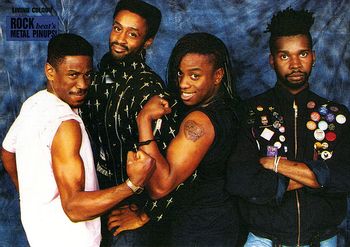 Original Line-up.
Look in my eyes, what do you see?
The cult of personality
"Cult of Personality"
Advertisement:

Living Colour is an American Funk Metal band from New York City, formed in 1983. A prominent black band of that movement, which also included Jane's Addiction, Faith No More, Fishbone, Primus, Red Hot Chili Peppers, and 24-7 Spyz in the late 1980's, Living Colour rose to fame with their debut album Vivid in 1988. Stylistically, the band's music is a creative fusion influenced by Heavy Metal, Funk, Hard Rock, Free Jazz, Hardcore Punk, and Hip-Hop, containing lyrics that attack the Eurocentrism and racism of America. Although the band scored a number of hits, they are best remembered for their anthemic single "Cult of Personality," which won a Grammy Award for Best Hard Rock Performance in 1989, and their highest charting single "Type." They were also named Best New Artist at the 1989 MTV Video Music Awards. After disbanding in 1995, Living Colour reunited in 2000.

"Look in my eyes, what do you see, the tropes of personality:"