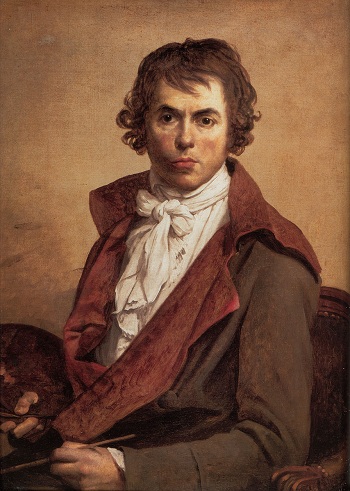 Jacques-Louis David (30 August 1748 – 29 December 1825) was the most prominent and influential painter of his age. He is famous for his brilliant portraits and especially his works in the genre of "history painting" which he single-handedly changed forever. David is also famous and controversial for being the first major artist who declared his art in the service of political causes. His work was defiantly pro-Revolutionary, it was intended to be propaganda for the Republic, and later, the Empire. His prolific output, and the power of his best work is such that his images, more than chronicles or historical accounts, provides the most endearing chronicle of The French Revolution. David was born into a wealthy family and his talent and passion for drawing was noted and nurtured from a very early age. He apprenticed with several major artists but already he began to revolt against the dominant Rococo style. Rococo or often described as "late Baroque" can be described as a sugary-sweet, sentimental approach to painting, where the idea was to glory in curves, filigree and all kinds of joyful forms. The paintings were aimed to provide a feast for the senses and several great art came in this period, such as the paintings of Watteau (whose landscapes inspired the real-life gardens landscaped by aristocrats). Neoclassicism was meant as a revolt against this artificiality. This meant not a return to the grandeur of Rome but a return to the virtues of the Roman Republic, emphasizing stern, stoic committment to patriotism and civic good.

Before the Revolution, David was active in the Royal Academy (located at the Palais du Louvre, soon to be a museum) and was famous for being an Insufferable Genius and highly ambitious man. He painted the portraits of several nobles and salon gatherers (though never the Royal Family). He spent much time in Rome, because, "Only in Rome can I paint Romans". This resulted in his engagement with "history painting". His subjects were scenes from antiquity - The Oath of the Horatii, The Death of Socrates - but painted with a greater attention to the philosophy and spirit of the Ancient World. Philosopher and art critic, Denis Diderot, noted that David's paintings often felt like ancient bas-reliefs come to life. When the Revolution began, David's work was judged by his former aristocratic patrons to be too incendiary and often banned from being exhibited at Salons. The real scandal was the painting, The Lictors Bring to Brutus the Bodies of His Sons

. This chronicled Lucius Brutus, founder of the Roman Republic and ancestor to the more notorious Marcus Junius Brutus, sternly and grimly sacrificing his traitorous sons for the Nation, a vindication of stern Republican patriotism. The Royal Salon's attempt to ban a display of the painting led to a cry of protest and the painting and David quickly became a Republican symbol.

David became a one-man propaganda division for the Revolution and, later Napoleon. His paintings include, the mammoth never-completed but iconic depiction of the Tennis Court Oath

and the young Joseph Bara

◊. His masterpiece is the single most iconic image of the Revolution, The Death of Marat

. David also sat on the National Convention during this period and like the majority of the Jacobins, he voted for the King's execution.

A Jacobin and a close personal friend of Maximilien Robespierre, David was imprisoned after the latter's downfall and his activity on the Committee of General Security(which oversaw executions during the Reign of Terror) made him fall out of favor. He was rescued by the Rise of Napoleon. David was fascinated by the General's Meditteranean appearance (which he likened to Antiquity) and started work on several works that built his legend. Napoleon for his part, was quite willing to overlook the fact that it was David who signed the death warrant of Alexandre de Beauharnais (Josephine's first husband) unintentionally clearing the way for him. Although Napoleon only sat once for a David portrait, David had a skilfull enough grasp of his features to create the most iconic images of his Legend, whether it's Napoleon Crossing the Alps

◊, Napoleon in his Study

◊ or the Coronation

◊. Napoleon, a fellow ex-Jacobin, also remembered David's skill in organizing Republican Pageants, and tasked him with to stage the festivities of the Coronation as well. As a regicide, David was exiled upon the Bourbon Restoration and settled in Brussells where he trained several painters. His work fell out of style but was revived in the middle of the 19th Century, especially for his Revolutionary Output which is regarded as his best work. His iconic images adorn the Louvre Museum and has inspired several major artists in the years to come.