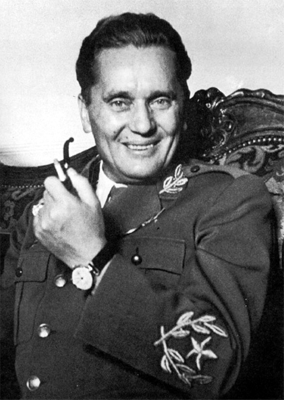 The Marshal himself.
"A locksmith in his youth. An Austro-Hungarian corporal. A case hardened revolutionary. Commissioner of the Comintern. A terrorist. Red menace. A robber. An illegal with ten different passports and names. A passionate hunter. Bon vivant. He had five wives and a party of his believers. An indomitable partisan. Undefeated by Hitler and Stalin. An adaptive statesman. A born Machiavellist. The lord of second Yugoslavia. No one before and after him has on this place more material for legends. He ruled the territory of the Balkans longer than Emperor Dušan, Duke Miloš and King Aleksander who probably would have used him as a pattern. A jovial dictator. The patron of the poor. The magnet of jet set. He sold his world vision like a new Christ of the Balkan peoples. A conjurer or the protagonist of an era, it was never clear to distinguish. One thing was for sure: Nothing in his proximity was of a small scale. Fortune and misfortune, deceit and truth, charm and actuality."
— The intro of the Serbian documentary series Crveno i Crno ("Red and Black")
Advertisement:

Josip Broz (Tito) (7 May 1892 – 4 May 1980) was born in Croatia in 1892. He was born to the relatively poor family of a Croatian peasant and his Slovenian wife. He worked as a mechanic before being conscripted into the Austro-Hungarian Army in 1914, and proved to be a very capable soldier, rising to the rank of Staff Sergeant and also earning a silver medal for valor. While fighting In the World War I, he was captured by the Russian Army. Broz converted to Communism and took part in the Russian Revolution in 1917. He spent most of the Russian Civil War in hiding in Siberia, where he worked as a mechanic at a Kirghiz mill and occasionally acted as a spy for the local Bolsheviks. After the Red Army drove out the local White Army forces, Tito joined the communist party and married a local girl, Pelagia Belousova, whose family were committed Bolsheviks.

Broz returned to the new Yugoslavia and became active in politics. The royalist government outlawed the Communists and in 1928, Broz was arrested and given a five-year prison sentence. On his release, he went to live in the Soviet Union and in 1934 began working for the Comintern. Soon afterward, he obtained the nickname Tito. He also had a falling out with his wife (allegedly he was disappointed by how she treated their son), and divorced her. In 1937, he met Herta Haas, an experienced revolutionary, whom he married in 1940.

On the outbreak of the Spanish Civil War, the Comintern established the Dimitrov Battalion. Named after Georgi Dimitrov, the battalion comprised Greeks and people from the Balkans. Tito's involvement with this battalion, and the Spanish Civil War in general, is rather unclear. He was responsible for recruiting and organizing volunteers, but he did this in Yugoslavia and France, and later claimed that he never set foot in Spain during the entire war. While there are numerous rumors he was in fact present in Spain, nobody has produced any convincing evidence of this (an often-circulated photo claiming to be of him taking a shower was actually taken in Marseilles, and isn't clear enough to prove it is indeed Tito anyway).

The Yugoslavian government headed by Prince-Regent Paul allied itself with the fascist dictatorships of Germany and Italy. However, on March 27, 1941, the Serbian people rebelled (led by some military generals, the British-backed Agrarian Party, but also supported by the Moscow-backed Serbian Communists) against the established Cvetković–Maček Agreement. The government was ousted, underage Prince Peter II was declared King, but ironically, the new government proclaimed it still wishes good relations with Germany. Unfortunately it had no effect, as Hitler was not amused at all. Ten days later, as a response, the Luftwaffe bombed Yugoslavia and virtually destroyed its capital, Belgrade. The German Army invaded and the government was forced into exile. Large parts of the country/ies were annexed by Germany, Italy, Bulgaria and Hungary, and several puppet regimes were installed - the largest being the Croatian Ustaše regime of Ante Pavelić which held rule of Croatia and Bosnia and Herzegovina.

Tito returned to Yugoslavia and helped establish the partisan resistance fighters. Initially, the Partisans took heavy casualties, while the Allies provided military aid to the Chetniks led by Draža Mihailović in fighting against Axis forces. Information reached Sir Winston Churchill that the Četniks had been collaborating with the Germans and Italians against communist partisans. At Teheran, the decision was taken in mid-1943 to switch this aid to Tito and the partisans.

1943 was a turning point for Tito's forces. The Germans launched several offensives to try and destroy the Partisan movement or at least eliminate its leadership but, while the partisans took heavy casualties, they were always able to regroup and strike again. Italy surrendered in September, while the Četniks' power was broken in the Battle of Neretva river (there's a famous movie about this — it even got close to achieving an Academy Award) when the Allies finally turned their backs on them, and the partisans inflicted such heavy casualties on them that they never recovered. By the end of November the same year, Tito was able to establish a government in Bosnia.

In 1944 the fortunes of war continued to favor the partisans. Adolf Hitler sent elite German paratroopers to kill Tito in his hideout Drvar, but Tito managed to escape. From that moment on, the Germans were no longer able to launch major anti-partisan operations. In May 1944, a new government of Yugoslavia was established under Ivan Šubašić. Tito was made War Minister in the new government. He and his partisans continued their fight against the German Army and in October 1944, they liberated Belgrade (with some Soviet assistance), thus ending the Serb puppet regime of Milan Nedić. By now, the Partisans had began reforming into a regular army.

In March 1945, Tito became premier of Yugoslavia. By now the remaining Axis forces were in full retreat. Facists holding the rules over the puppet government in Zagreb, the capital of the Independent State of Croatia

lost and either fled or were captured (and usually killed after a show trial). Some Axis forces continued to resist for a week even after Germany surrendered, but they were quickly overcome. Over the next few years Tito created a federation of socialist republics (Slovenia, Croatia, Bosnia-Herzegovina, Serbia, Montenegro and Macedonia), plus two autonomous provinces within the frame of Serbia — Vojvodina and Kosovo.

Tito had several disagreements with Josef Stalin and in 1948, Tito took Yugoslavia out of the Comintern and pursued a policy of "positive neutralism". Real and suspected Stalinists, or those who were suspected of being more loyal to the USSR than Yugoslavia, suffered various forms of oppression, from intimidation and losing their jobs or Party membership, internment in the various jails, the worst of which was the Goli Otok labour camp

, or even outright assassination. In effect, Tito used Stalin's methods against the Stalinists.

Influenced by the ideas of his vice president, Milovan Đilas, Tito broke with the Stalinist model of government and attempted to create a unique form of socialism that included profit-sharing workers' councils that managed industrial enterprises. However, relying on his powerful State Sec apparatus, he quashed all attempts, including Đilas', to create opposition parties as well as any meaningful challenges to the Communist Party of Yugoslavia (later renamed the League of Communists of Yugoslavia). Yugoslavia remained an authoritarian, one-party state at least until his death (the first democratic elections were held only in 1990).

Yugoslavia remained neutral throughout the Cold War, refusing to join either NATO or the Warsaw Pact, and went on to become one of the founding nations of the Non-Aligned Movement. As such, Tito's Yugoslavia was not subject to political repression to the degree of the rest of the Eastern Bloc, with a strong homegrown film and art scene, and Western cultural products such as film and music, and international travel and studies were freely available to Yugoslavian citizens.

Although he became president-for-life in 1974, Tito established a unique system of collective, rotating leadership within the country. Tito died on 4 May 1980, and the system did not last long. Lacking a strong leader, the Belgrade leadership pushed for a highly centralized state, but was resisted by the ruling parties of each republic, who accused them of wanting to impose a Serbian hegemony over the other republics. The economic situation of Yugoslavia also deteriorated after Tito's death and, with the collapse of the East Bloc, the communist parties lost their monopoly on power and lost the elections to the nationalists in 1990. In June 1991, Slovenia and Croatia declared independence, which led to the The Yugoslav Wars.