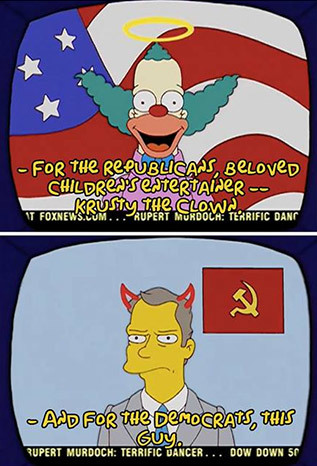 In fiction, the news media will often be presented as less than impartial. The media outlet may churn out fluff pieces and slanted reporting praising the parent company or propaganda praising the government, and often Lowest Common Denominator trash designed to keep the 'sheeple' from thinking.

They may be heavily biased toward one end of the political spectrum, with only token, ineffectual representation given to the other side. Which end, extreme conservative or extreme liberal, depends on the political views of the writer. Conspiracies are very likely to be involved.

Sometimes the media are given a shallow, even vapid, appearance. They are shown as caring more about celebrity hijinks, sensationalized violence and crime, and missing white women than about things like wars, poverty, and corruption that are affecting far more lives. These news desks will be staffed by men and women who look like they came out of a fashion magazine rather than a journalism school. These are likely to display a bad case of Worst News Judgment Ever and simply selling out for ratings, and only say what people want to hear because people don't want to be told that they're living in a Crapsack World; they want to escape from everything. Or they will actively promote the idea that the world is a Crapsack World (because If It Bleeds, It Leads), try their best to scare people into continuing to watch the news, and blame all the woes on political opponents.

Compare with Propaganda Piece. See also Old Media Are Evil. Likely to be staffed by the Fox News Liberal and the Pompous Political Pundit, and possibly an Immoral Journalist. Can sadly be Truth in Television.