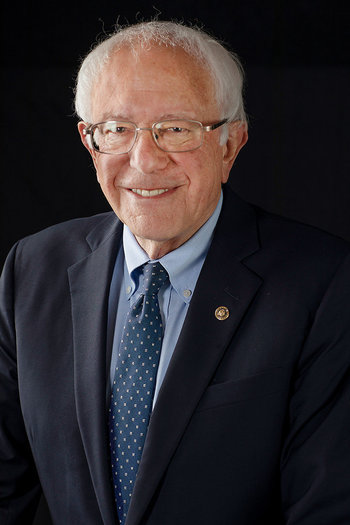 No, he's not Larry David.note  They are distant cousins, though.
"I did not get into politics to figure out how to become president. I got into politics because I give a damn."
— Bernie Sanders in this tweet

, on December 11, 2015, back when he was still seen as an outsider candidate to most Americans.
Advertisement:

Bernard "Bernie" Sanders (born September 8, 1941) is a United States Senator from Vermont. Born and raised in Brooklyn, New York City, he grew up in a Jewish family with his parents and his brother Larry (who moved to Britain as an adult and also became a politician). He became interested in politics at a young age, participating in the Civil Rights Movement with none other than Martin Luther King Jr. himself. Bernie's father emigrated to the United States from what is now Poland just before the rise of Adolf Hitler, and much of his extended family was murdered during The Holocaust. Sanders credits much of his early interest in politics to this: "A guy named Adolf Hitler won an election in 1932. He won an election, and 50 million people died as a result of that election in World War II, including six million Jews. So what I learned as a little kid is that politics is, in fact, very important." Sanders moved to Vermont in 1968, and his first position as an official elected member of government was as mayor of Burlington; he served as such from 1981 to 1989. From there, he served as the representative of Vermont's at-large House district in the U.S. Congress starting from 1991. He was elected to his Senate seat in 2006.

Bernie Sanders gained national attention during the 2016 presidential election cycle, in which he mounted a long-shot bid for the Democratic Party nomination and gave the expected winner, former First Lady, senator, and Secretary of State Hillary Rodham Clinton, an active contest, to nearly everybody's surprise.note Despite having always been elected as an Independent, Sanders caucuses with the Democrats in Congress. Nevertheless, running for the party's nomination without officially being a member of it was the subject of some controversy. Although he didn't win,note Some people attribute this to corruption within the Democratic National Committee, as Bernie supporters were generally a lot more enthusiastic than Hillary supporters. his massive grassroots campaign came very close, and his candidacy inspired other significant political figures such as Alexandria Ocasio-Cortez to run for office. Sanders is known for his progressive, left-wing political positions. A self-described democratic socialist (some would say "social democrat"

), he supports a single-payer health care system in the form of Medicare for All and a massive overhaul of the United States' energy economy through a Green New Deal. He is also notably critical of the United States' habit of engaging in foreign regime change, particularly during The War on Terror, supports a two-state solution to the Arab–Israeli Conflict, and has passionately fought for the rights of the LGBT Community since long before the topic became a mainstream issue. He also advocates for criminal justice reform, automatic voter registration, and is notably the only presidential candidate to call to abolish ICE (U.S. Immigration and Customs Enforcement) and return to the immigration enforcement system used prior to 2003 (where multiple agencies shared the responsibility).

Sanders's 2016 political campaign gained massive traction among young people, and many of his notable positions, such as a 15-dollar hourly minimum wage, have become part of the Democratic Party's mainstream platform. In 2019, Sanders announced his intention to run for the 2020 Democratic presidential nomination, with his campaign drawing heavily from his strong base from the 2016 primary cycle. For a time, Bernie was seen as the frontrunner, but ultimately lost out to former vice president Joe Biden, who became the nominee and, eventually, the President after defeating incumbent Donald Trump.

In general, most portrayals of Sanders focus on his populist rhetoric, Jewish New Yorker heritage and fiery personality. His Large Ham speeches and his distinct Brooklyn accent made him an easy source of humor among political satirists. Likewise, his old age and Jewish heritage is handy for anyone looking to making jokes about elderly people, Jews or elderly Jews.