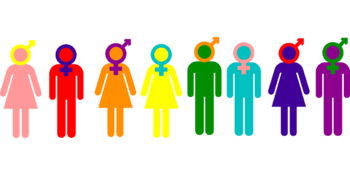 The LGBT Community is a mostly informal alliance encompassing those who to varying degrees are sexually oriented toward same sex individuals, as well as those whose gender identity does not fully match the sex of their birth. While there were likely minor movements and alliances since the sexual revolution of The '60s, a formal nationwide alliance did not manifest until 1985, when the Gay & Lesbian Alliance Against Defamation

(GLAAD) was formed as a response to sensationalist AIDS-related news coverage. The notion of an alliance became quickly popular among gay and lesbian individuals, with BBSes of the like forming on a budding internet. The inclusion of transgender individuals under the alliance happened some time between 1985 and 1989, with the first GLAAD Media Awards including references to the term (the original 1996 GLAAD website

Outside of GLAAD, other similar alliances and communities sprung up in various ways. ACT UP, Queer Nation, and Lesbian Avengers all emerged with a focus on the AIDS epidemic. LGBT emerged as a common abbreviation and gained usage in various other organizations. On the budding graphical internet, LGBT communities on Prodigy, CompuServe, and AOL sprung up such as the Gay and Lesbian Community Forums (GLCF) on AOL which had the Transgender Community Forums (TCF) as a subcommunity. Whether the alliance expanded or simply became more specifically defined since 1989 is a common topic of debate, but GLAAD's core purpose of inclusiveness and proper media and political representation has remained to this day.

LGBT as a term is a broad umbrella abbreviation that stands for Lesbian, Gay, Bisexual, and Transgender. On a greater scale, it implicitly covers a wider variation of individuals along the lines of sexual orientation and/or gender identity. While initially conceived as a political alliance, it has evolved to refer to the various communities who face similar societal and political challenges related to their orientation and/or identity. Terms like "LGBT community" and "LGBT youth" are common in political discourse.

LGBT often has additional letters appended to it, with the most common additional letter being Q. It's so common, in fact, that LGBTQ was mentioned by both United States major party presidential candidates during their respective 2016 national conventions.

Letters and characters commonly added include:

Disagreements as to what letters should be added are commonplace, with redundancy being a commonly cited concern. Comics poking fun at the rapid addition of letters and general readability are additional concerns, and disagreements have led to a Broken Base among those under the umbrella. The term "Queer" is often a source of contention as it is technically a reappropriated slur. Splitting T and I from LGB has also occasionally been brought up, as well as disagreements between G and L being commonplace in the 90s due to different lifestyles. Disagreements between GL and B sometimes emerge to this day for similar reasons. Regardless, LGBT has been the most stable version which has contributed to it getting its own article on the other wiki

An alternate term in use is GSRD, which stands for Gender, Sexual and Relationship Diversity. Many perceive this term as being inherently more open and inclusive than the LGBT+ acronym is because it relies on broad categories of identification (gender, etc.) instead of specific identities (gay, etc.) and is virtually impossible to gatekeep.

There are also disagreements by various individuals as to whether or not the label should exist at all. Others feel that foregoing labels is an important step toward acceptance, much akin to the notion of post-racial

where true cultural acceptance is when something "just is" and doesn't need to be mentioned. Still others may technically qualify for one of the listed groups but refuses to self-identify as LGBT. Reasons include self-denial, being closeted, those who choose not to reveal simply for reasons of general privacy but don't go out of their way to hide it, transgender individuals who just want to live as their identified gender ("stealth"), and/or any individual not wanting any perceived political baggage attached to the term. Another reason can be a feeling of not belonging or not being accepted within the LGBT+ community, especially if a person has been discriminated against by others who strongly identify as LGBT, and especially if these have happened at LGBT+-oriented events or other perceived "safe spaces".

Media depictions of LGBT individuals often equate a tendency to recite more letters with increased levels of political activism. Some depictions suggest the character may have a phobia of those who don't fall under the umbrella, or at least a sense of duty to protect one's own.