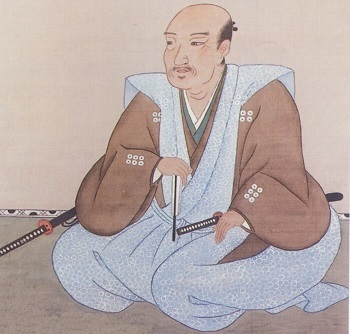 An enduringly popular figure of Japanese historical legend, Sanada Yukimura was a Sengoku/early Edo Era general who reached Folk Hero status with record speed after his death. His usual appellations are "the bravest warrior in Japan" and "crimson war demon." He owes his fame mostly to his badassery during the Siege of Osaka.
Advertisement:

Yukimura's real name was Sanada Nobushige — the romantic name "Yukimura" is a later construction, and it was never used during his life. His youth was a turbulent time for the Sanada: as the second son of a highly respected samurai and tactician, Sanada Masayuki, a vassal of Takeda Shingen, he was first sent to the Uesugi as a hostage in return for military assistance, and later he was sent to serve Toyotomi Hideyoshi while the rest of the Sanada allied directly with Tokugawa Ieyasu. During the first Eastern-Western conflict Yukimura and his father sided with Ishida Mitsunari, but Ieyasu emerged victorious and Yukimura was exiled, barely avoiding execution (his older brother Nobuyuki, Ieyasu's son-in-law, interceding on his behalf). He spent the next 14 years in exile, until he received a secret message that the remaining Toyotomi allies were regrouping to rise against Ieyasu.

During the first campaign of the Siege of Osaka (1614-15, also known as the Toyotomi clan's last stand) Yukimura was in charge of planning the defense of Osaka castle, which he did so well that the castle was nigh impregnable. After the two sides signed a temporary peace agreement the outer defenses of the castle were destroyed, so Yukimura saw a lot more action in the second campaign. His most famous fight was the battle of Tennouji, the last desperate effort of the Toyotomi army. When it became apparent that they weren't going to win, Yukimura reportedly said: "Well, the war is over - all that is left for us is to fight to our hearts' content. Our goal is Tokugawa Ieyasu's head!" He launched a head-on assault and managed to break through the defenses of Tokugawa Ieyasu's personal army, tore down his flag and forced Ieyasu to flee and even consider seppuku. However, the Tokugawa forces greatly outnumbered Yukimura's already tired troops, and once they got over the panic the tables were turned. Reinforcements were late, and in the end Yukimura himself was too exhausted and bleeding from too many wounds to go on - most accounts say that unable to fight any longer, he let himself be killed by the enemy soldiers. His death completely demoralized the Toyotomi forces, and by the next day the siege was over.

Yukimura's bravery at Osaka earned him his enemies' respect. Tokugawa Ieyasu regarded him as the most dangerous general in the enemy camp (he even tried to get Yukimura to switch sides, to no avail), and later claimed that Yukimura was the one he most wanted to have a drink with in the afterlife. Date Masamune was likewise impressed, and after Yukimura's death he allowed his vassal clan, the Katakura, to shelter three of Yukimura's children by adopting/marrying them into the family. Shimazu Tadatsune, famous badass in his own right, gave Yukimura the epithet "bravest warrior in Japan".

However, almost immediately after his death rumors began circulating about Yukimura. Many people said he only faked death to escape with Toyotomi Hideyoshi's heir so that the Toyotomi may rise once again. Other rumors said he went into hiding to prepare for revenge on the Tokugawa. Word of mouth embellished his heroics in battle, and legends were born about his death. In record time the badass but humble general Sanada Nobushige had transformed into Sanada Yukimura, model samurai, passionate and fearless warrior, loyal unto death, with a heartwrenchingly tragic fate. Unsurprisingly he was especially popular among those who opposed the Tokugawa shogunate (causing some headache to his brother Nobuyuki), but the shogunate also made a point of praising his loyalty and steadfastness. During and after the Meiji Restoration Yukimura gained a more general appeal, getting younger and younger in the process, so in less historically accurate works he's often depicted as a young man. (The real Yukimura died at 49.)

Due to his historical red armor, in fictional works Yukimura normally wears red. He's usually the Red Oni if there is a Blue Oni available, is Hot-Blooded and associated with fire. He also tends to use fancy spears, historically his weapon of choice. It's common for him to be assisted by a group of fictional ninja called the Sanada Ten Braves whose most prominent members are Sarutobi Sasuke, Kirigakure Saizo and Kakei Juzou. He usually wears the Sanada clan's crest: six coins to pay for crossing the river of the underworld, which symbolizes the motto "Always ready to die for a worthy cause."