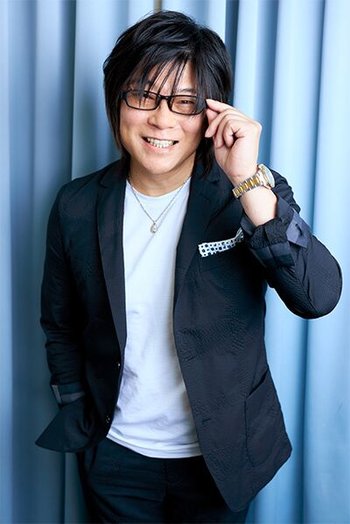 I have been waiting for this moment. Now, I shall give TV Tropes TRUE despair.
Advertisement:

Toshiyuki Morikawa. Do not forget this name!

Toshiyuki Morikawa (森川智之)note sometimes misread Tomoyuki (born January 26, 1967) is one of the seiyuus who has been around since the old days (having attended the same voice acting class with Kotono Mitsuishi) and currently still lends his voice to the job. He has quite a huge fanbase too (due in part to being one of the more attractive seiyuu around), and is the current voice of Sephiroth from Final Fantasy VII. His voice range is versatile, ranging from calm and cool characters, to Hot-Blooded young men, to even psychopathically cold villains. From badass to Bishōnen, he does them all just fine. Regardless of morality, if the character has White Hair, Black Heart (such as the aforementioned Sephiroth), there's a good chance he's voicing them.

, he has the third most number of roles in anime after Takehito Koyasu and Shin-ichiro Miki — as of February 2022, he had over 560 credits, making him the third most prolific seiyuu.

Best buds with Nobuyuki Hiyama, went as far as spreading a "Hiyama abandoned me!" mass phone call to other colleagues while drunk oncenote when all Hiyama did was send this guy a 20-minute taxi ride home by himself, he is also good friends with fellow seiyuu Fumihiko Tachiki and has a lot of co-workings with Nobutoshi Canna and Nozomu Sasaki.

Along with Hiyama, the two of them were involved with the birth of Show Hayami's Super Stylish Doctors Story.

Notable alongside seiyuu like Yuji Ueda, Kosuke Toriumi, and Wataru Takagi in that he did a lot of roles in most of Capcom's old video games.

He is also quite popular in the Japanese dubbing industry, being the dub voice of Obi-Wan Kenobi (Ewan McGregor) in Star Warsnote "It's over, Namikawa! I Have the High Ground!", Ennis del Mar (Heath Ledger) in Brokeback Mountain, Neo (Keanu Reeves) in The Matrix, and Bilbo Baggins (Martin Freeman) in The Hobbit, as well as Tom Cruise and Adam Sandler. The Other Wiki states that he has been the dub voice of many leading roles in Western-world movies when they are dubbed to Japan. He also has quite some role in the Western dubbing of Spider-Man. He is the dub voice of Spidey himself in the 1994's animated series, and in the third movie, he is Eddie Brock/Venom (Topher Grace). He voiced Everett Ross (Martin Freeman) in Captain America: Civil War and Black Panther (2018). He also voiced Yon-Rogg (Jude Law) in Captain Marvel (2019).

SHINKUUUUU HADOOOOOOOOOOOUKEN!!!!! SONIC-SONIC-SONIC-SONIC BREAK! *bzzt!* Oh no! The mic! I should have been the one to fill the mic's dark soul with LIIIIIIGGGHT!!!
Let us meet again...IN THE FIRES OF HELL!
Killer Queen has already touched the back button. *click*
I will... never be a memory.