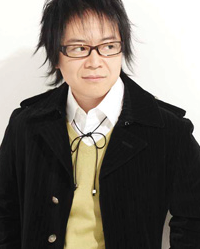 Oh, welcome. Please, won't you sit down? Care for a drink? I assure you, it's not made from other people's blood.
Advertisement:

So you wish to learn about the acclaimed voice actor Nozomu Sasaki? You should have seen the look on his face as I plunged the knife into his heart. Well, Nozomu Sasaki (born January 25, 1967) was the No.1 male idol voice actor of the The '90s thanks to his large amount of Bishōnen roles, a beautiful singing voice, and his cute face, note Not many people can pull off a short Jheri curl with this much sass.

◊ and has been the winner of the Seiyuu Grand Prix ranking more often than anyone of his generation. Sasaki was known in his prime for his ability to range up towards the contralto-near-mezzo register, comparable to Mitsuki Saiga, and near identical to Minami Takayama's voice range - especially to her Conan voice; this allowed him to play lots of adorably precocious children in a very young age range, which most actors in his time couldn't achieve. For the knowledge of the newer generation anime fanbase, taking account of his popularity and prime vocal type, his line of successors would be Jun Fukuyama and Yūki Kaji.note  Especially Yuuki Kaji, since Kaji is Sasaki's kohai via Arts Vision's voice acting school: Japan Narration Performance Research Center's annual audition first-place tuition-free enrollment grant. Sasaki was the recipient of year 1987 (2nd annual), while Kaji was the recipient of year 2002 (17th annual).

He has been in the business since the late eighties. In fact, he was part of the first Seiyuu Boy Band ever to become popular - The NG5; it was made of the five main voice actors of Ronin Warriors, which included Takeshi Kusao.

Most of his famous roles are his early onesnote Which were done in his twenties., often typed as The Hero, The Heart, Nice Guy, Mouthy Kid, and The Creepy Child, such as Tetsuo, Shin Mouri, and Yusuke Urameshi. Unfortunately, he has undergone some dramatic switch in Typecasting due to his voice aging early in the form of dropping a couple of octaves down to the tenor with a much hoarser texture; Sasaki outed this was more of a "voice crack" on his part than an aging problem due to a period where he received a certain role with loads of mad shouting, all the while squeezed in live music performances, and the inability to give his voice a resting period due to his tight schedule. Therefore, most of his recent characters are of The Sociopath, Ax-Crazy and Jerkass type such as Hayate Gekko, Jin Atsuku, Mello, and Johan Liebert.... I "helped" him along, of course.

Oh yes, he doesn't like to use the word 'Nii-san' thanks to a certain role he had in After War Gundam X, but it may be a whole different story if that word was recited by a certain 'younger brother' of his, of which project also happens to have an "X" in it's title. Along with his other fellow YuYu Hakusho cast mates, he's claimed all three of them to be his True Companions.

Nozomu can speak Japanese and English, the latter deciding to take English lessons seriously when he was in junior high school. He takes the opportunity to interact with fans/English-based interviews, but asks the assistance of translators to translate his Japanese for him a few times.

Please do not confuse him with the similarly-named voice actress, Nozomi Sasakinote While their given names are pronounced differently, their full names in kanji form are written exactly the same..... I had to kill her too.