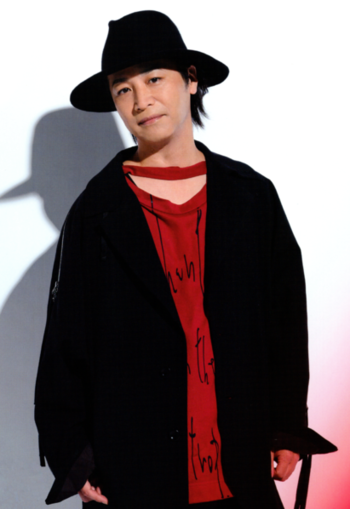 Kosuke/Kousuke/Kohsuke Toriumi (born May 16, 1973) is one of the last veteran seiyuu before the age shift. He has a very versatile voice, suitable for anything from an Idiot Hero to a stoic badass. Sometimes, he's called "Tori-chan". He appears in a lot of Anime as well as Visual Novels these days.

According to some directors, he's the go-to guy whenever there's a role that requires a lot of impassioned screaming.

He goes by the name 'Spoon Sakiware' and 'Atsurō Wakisaka' when he does voice work in R-Rated works. As of March 10, 2020, has a YouTube channel called Tori-san Gakkyū

If you keep on clicking on the links on this site one too many... Well, you might want to worry about your lifeeeeeEEE Mr. Tropeeeerrrr...!