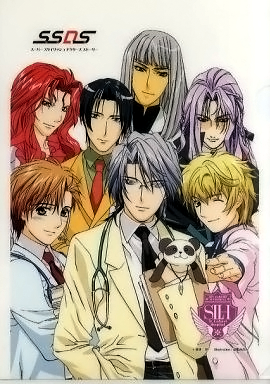 On call to cure the hearts of all fangirls!
Advertisement:

A story that can be summarized into one sentence—

Conceived on the set of Toshiyuki Morikawa and Nobuyuki Hiyama's annual live talk show: Omaera No Tame Darou, where Hayami, who was their guest star at the time, dressed himself as a physician to cater the fangirls. The fangirls instantly responded with madness, leading Hayami to later question the duo: "Pals, I think I'm onto something here. Wanna help me out?"

The setting takes place within the world's finest medical facility, The JOY Zaburo Memorial: St. Laforet Hospital — A place where the stylish of all stylish doctors (lady doctors included) from all corners of the world provide the best medical care to their patients with love and JOY!

Officially named as "S.S.D.S.~ Super Stylish Doctors Story~", S.S.D.S. is an "on-and-off-going" multimedia franchise that started its run in year 2003, focusing primarily on Drama CDs, and live stage performances; spanning through radio shows, online channel, music albums, and a video game that blew up to Masami Obari Humongous Mecha proportions. Hayami recruited all friends and juniors who were mainly not part of Koyasu's alliance note There are members who participated in the Weiss project, but were all antagonists. Such as Toshihiko Seki, who played the antagonist in Weiss Gluhen, while Ryōtarō Okiayu was the antagonist in the original tv version of Weiss Kreuz. to provide them a platform to interact with their fans and showcase their performance talents. By "on-and-off-going," the franchise is produced based on the availability between the core members of the cast,note Those seven hot guys pictured on this main page, along with one administrator. if most of the core members are available at a certain time frame, they'll gather up and bring some juniors along for a performance; be it live, radio, or drama disc.

This franchise provides the following tropes: