Western Animation / The Fight for the FoxBox 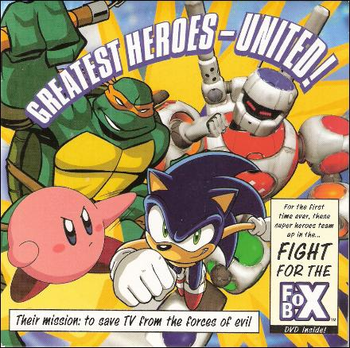 The FoxBox lost. It was soon canceled. NOT!
Advertisement:

The Fight for the FoxBox is a 2003 half-hour-long TV special produced by 4Kids Entertainment for its flagship FoxBox (later known as 4KidsTV) block on Fox. An Intercontinuity Crossover, it aired on August 31 as a prime-time special to promote the block's programming slate for the 2003-04 season. Fox stations that passed on the block preempted the special for syndicated or local programming in its place, which may explain why 4Kids released a promotional DVD of the special distributed through various magazines.

It's basically one long Enforced Plug for FoxBox shows that were returning for that season or were to premiere on the block by then. Basically, the story is that a mysterious voice informs the bad guys of five TV shows (Shredder, King Dedede & Escargoon, Dr. Eggman, Dial Bolic, and Dr. K) that he has stolen the "FoxBox broadcast codes," and that the network can't go back on the air without the codes. He gives the codes, in pieces, to each of the five villains, and tells them to guard it well. Ace Anderson and Jack Kowalski, the Funky Cops, overhear this tirade on their car's CB radio. The heroes of each TV show also get wind of what's happening, and they set out to take the codes back.

Relying mostly on recycled clips and animation from the TV shows it features, about the only thing new about it is the way the clips are edited together and the audio/dubbing by the original actors. (That is, assuming that it is mostly footage ripped and edited from the TV shows.) There is one scene with less-than-stellar animation where Funky Cops Ace and Jack question Meat on what he knows about the disappeared codes. He then proceeds to fill them in on what's been happening on Ultimate Muscle up to that point.

When the characters of each show re-obtain the code their antagonist is carrying, it is displayed on the screen in some way (mostly for real, but on one occasion a character only says it and the code appears on screen).

The TV special ends with the villains reporting how they failed to keep their code safe. The Voice says "You fools!" and informs them that Donatello has set up a website (now defunct) called Savethefoxbox.com, where viewers can enter in the codes to get the network back on the air. During his evil laughter, the sound visualization for his voice fades away to reveal his real identity - Wayne Cramp. The half-hour ends with a non-conclusive ending of him pushing his brother Lucien down the stairs, with an appearance of the show's logo.

Shows included for crossover (alphabetical, not chronological, order; the ones listed in bold are the main four) include:

As such, this half-hour special incorporates many tropes used within those shows.

It has an IMDb page

that details a press release by 4Kids that explains other details about the release and broadcast of this special. In addition to its promotional DVD release it was also included as a bonus feature on the Kirby: Right Back at Ya! DVD "Kirby's "Egg-Cellent Adventure".

Tropes used in this half-hour special include: