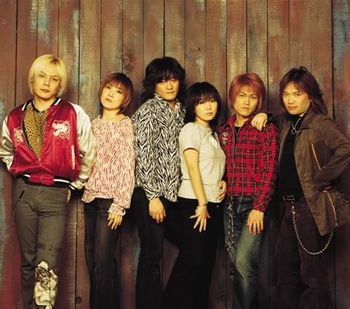 Don't touch that picture, it might just burn your finger off.
Advertisement:

Currently, the band is composed of Kageyama, Endoh, Masami Okui ("Rinbu -Revolution-", "Shuffle"), Hiroshi Kitadani ("We Are", "Madan Senki Ryukendo") and Yoshiki Fukuyama (singing voice of Nekki Basara, "Makka na Chikai", "King Gainer Over!"). Mizuki reduced his status to "part-time member" after the group got off the ground, Sakamoto "graduated" from the group and rejoined Anthem as well as started up new metal cover bands EIZO Japan and Aisenshi, and Matsumoto left in April 2008 to pursue solo work. They are occasionally joined by Ricardo Cruz, Brazilian manga translator and Promoted Fanboy, on various recordings and in concerts in Brazil.

See also Super Robot Wars, Awesome Music. Not to be confused with the antagonist aliens in Sentou Yousei Yukikaze known as the JAM.

This band has performed songs for:

And released these albums: