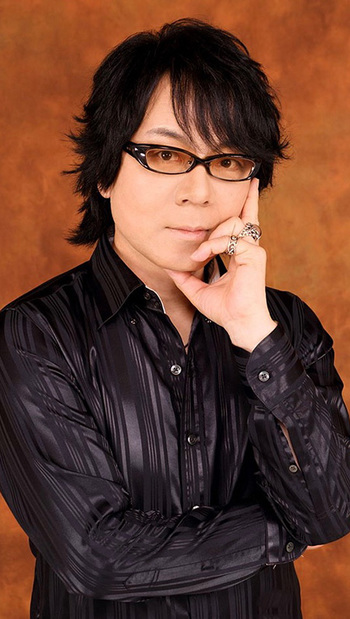 Show Hayami is a Jenius.

But in all seriousness, Show note or Sho / Shou Hayami (real name Yasushi Ōhama, born August 2, 1958) is one of the better-known veteran seiyuu in the anime world. He is known for the grandiosity of his voice, which often lands him the role of a Large Ham and goes well with charismatic leaders, whether a Big Good or Big Bad. On the other hand, he can also portray complete psychopathic madmen very convincingly, probably best known for his role as Sōsuke Aizen of Bleach.

Beware if someone voiced by him seems both good and affable: chances are he will turn out to be a heroic sociopath... and that's assuming he remains a hero at all. Some of the exceptions are the archangel Uriel in the Angel Sanctuary drama CDs, a little emo, but undeniably heroic. Two others are the title character, Exkaiser from Brave Exkaiser, and the title character, Da Garn from The Brave Fighter of Legend Da-Garn.

He's got rather a lot of fangirls, mainly because of his rich, husky baritone, which they find very sexy. Masakazu Morita called him out on this at one live event, where 90% of the audience practically fainted the moment he opened his mouth. Masakazu jokingly asked him to tone it down lest he steal all the attention, and Show apologized, which only made the girls scream louder.

He is married to fellow seiyuu Rei Igarashi, who is best known as Evil Matriarch Precia Testarossa and Alpha Bitch Mira Kagami; perfect match. And has a nephew-turn-adopted son, Hideyuki Hayami who also followed their steps and became a voice actor.

He adores Toshihiko Seki, his junior.

He's unrelated to Saori Hayami (their names aren't written the same in kanji).

Tropes relating to his roles:

Shatter, Kyoka Suigetsu... Silly troper, since when were you under the impression that you were reading a trope page? You shouldn't have underestimated the power of my parfum...lest you want to be a tool who doesn't deserve to dream.