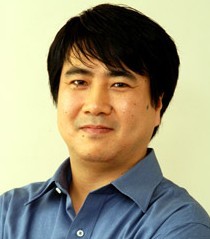 Yasunori Matsumoto (born February 7, 1960) is one of the more 90's veteran voice actors. He's not pigeonholded, but he's mostly known for his mature, yet soothing voice which makes him the go-to for all those nice guys next door, and lovable dads. Of course, he is more than capable of hilarity, and yes, his sound when playing those whose suffering made us laugh was quite the delight to all; his motivation as a voice actor is so high that his adrenaline begins bursting!

Matsumoto is also a guy fit for Hotblooded principal heroes, which was proven with his break as Ryo Hibiki of Sonic Soldier Borgman. However, his journey on the hardcore heroes lane was surpassed by Nobuyuki Hiyama. note Who debuted roughly the same year as Matsumoto, but under different agencies. Hiyama also had a much rougher start than Matsumoto. Therefore, he steered steadily into the lane of the Idiot Hero type; though he had portrayed this type through Yutaro Katori beforehand, he eventually solidified this characterization with Slayers' Gourry. Contemporarily speaking, Matsumoto can be found taking more narration cases for various non-anime-related Japanese TV shows.

He was married to fellow voice actress Junko Sakuma until her death in 2011.

And don't confuse him with Yasunori Masutani.

Are these roles done by Yasunori Matsumoto?