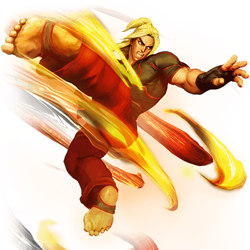 Ken returns once again in Street Fighter V, this time sporting a new look, hanging the top part of his red karate gi off his waist so he can wear a black shirt with red trim with matching gloves, and growing his hair out a bit longer and tying it off into a topknot.

Originally, Ken served as essentially a Palette Swap of Ryu, as mirror matches were not possible in the earliest installments. However, as the series went on, his style deviated further away from Ryu's until it evolved into something completely different. Ken's take on the Ansatsuken style focuses more on his natural talent as a fighter, putting his own personal spin on the signature techniques. His fireballs are more useful for pressure rather than zoning, his uppercuts generally reach further and are stronger as they set the opponent on fire, and his spinning kicks don't knock down like Ryu's but in exchange set the opponent up for Ken to continue his offense. Where Ryu has strong defensive capabilities and damage, Ken is more aggressive and mobile.
Retsu 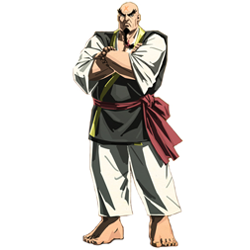 Fighting style: Shorinji Kempo
Voiced by: note Takeshi Aono (Street Fighter II Mad Revenger CD drama)
A banished monk who was notably the first guy you fought in the original Street Fighter. Although he never actually appeared as a fighter in subsequent games, he appears in concept art for the first Street Fighter Alpha, where he is shown beating the crap out of Dan and has a role in Udon's Street Fighter comics as an old friend of Gouken.
Geki / Geki II 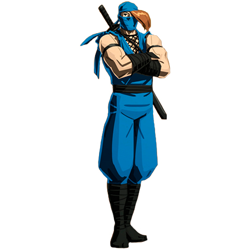 Fighting style: Ninjutsu
A claw-wielding ninja who fought in the first tournament. It's been said that he was the one who a) trained Vega; and b) is related to Ibuki (possibly an uncle). He also uses shuriken and teleportation techniques.

He was apparently killed at some point off-screen, but he's been shown to have a disciple, also named Geki.
Lee 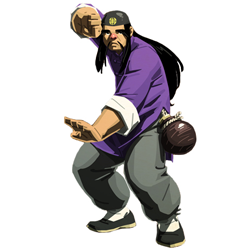 "I have good fortune!"

Fighting style: Bajiquan and Drunken Fist
A Chinese Kung Fu master who enters the first tournament to test his skills. Lee is the uncle of Yun and Yang from Street Fighter III. Other than the original Street Fighter, he makes an appearance in the Sakura Ganbaru!! manga as one of Sakura's opponents, and in the UDON comic as a challenger of Fei Long.
Advertisement:
Gen 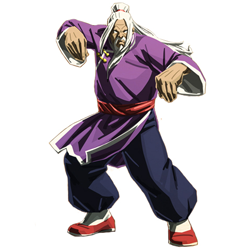 Fighting style: "Mourning Style" and "Hateful Style" Kempo
Voiced by: note Wataru Takagi (Street Fighter Alpha series), Michael Sorich (Street Fighter IV; English), Yohei Tadano (Street Fighter IV; Japanese)
Portrayed by: note Robin Shou (Street Fighter: The Legend of Chun-Li)
Former assassin and mentor to Chun-Li. A kung-fu master versed in an assassination style he created based on Chinese martial arts. Reappearing in Street Fighter Alpha 2, it is revealed he is dying of leukemia and seeks one last good fight before he passes on to the next world. This brings him to Akuma's attention and the two fight, but Akuma stops the fight, noticing Gen's illness and leaving, due to his principle of never fighting anybody who isn't at the top of their game. An insulted Gen goes after him, seeking to finish the fight. In IV, it is revealed that he was there when Chun-Li's father was abducted and killed by Shadaloo; his illness kept him from saving his friend, much to his chagrin.

He appears in Akuma's story prologue in V, where their final battle is depicted. He is eventually defeated and killed by Akuma, receiving the epic fight to the death he had long awaited.

Gen's playable debut in the Alpha series established him as one of the most difficult and tricky characters in the series. He has two stances: Sou (Mourning, based on Mantis-style kung fu) and Ki (Hateful, based on Crane-style kung fu), each having their own unique properties. In Mantis stance, he focuses more on strong fundamentals, with good ground movement, long-range attacks to poke at the opponent, and strong anti-air capabilities. In Crane stance, his style focses more on aerial movement, featuring a longer jump arc and an off-the-wall diving kick that can be directed at various angles. A trait unique to Gen is that he can seamlessly transition between these stances at will by buffering in the inputs for them during any move, and mastery of Gen involves knowing precisely what situations are best appropriate for each stance and when to switch between them.
Birdie 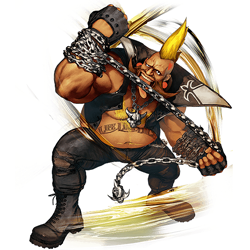 He returns to the series in Street Fighter V, no longer employed by Shadaloo, and with an updated look, looking noticeably paunchier than previous incarnations. In V, he's living as a freeloading house guest in Karin Kanzuki's estate, where he spends all of his time eating, sparring with Karin, and acting as a security guard.

Birdie originally started out as a mostly nondescript CPU-only opponent in the first game, but his playable debut in the Alpha series fleshed out his fighting style significantly. Birdie is a close-to-mid range brawler whose slow movement is mitigated by his attacks generally having long range and far travel distance, as well as Birdie himself having high damage output. On top of all of that, he also has command grabs to open the opponent's defenses. His return in V stays true to his Alpha incarnation's design philosophy while also greatly reworking and expanding upon it. While fundamentally sound, Birdie's true strength comes from his unique bag of tricks, and when utilized well he can ride that momentum to victory.
Eagle 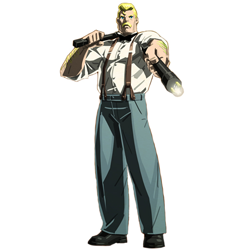 Fighting style: Bojutsu
Voiced by: note Jin Yamanoi (Capcom vs. SNK 2, Street Fighter Alpha 3 (Max and Upper only))
British bodyguard who enters the first tournament to test his skill. He did not make a playable appearance until Capcom vs. SNK 2, and was added to the portable editions of Street Fighter Alpha 3 after he gained more recognition.
Joe 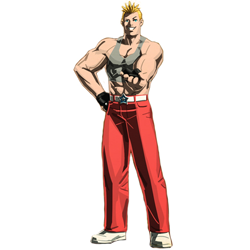 Fighting style: Kickboxing
An underground martial artist from Missouri who entered the tournament to test his skills. He eventually faced money problems, and turned to violent crime to solve them. He currently fights in tournaments under the name "Superstar."
Mike 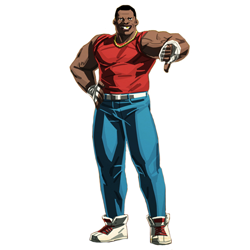 Fighting style: Heavyweight boxing
A former criminal from Oklahoma who entered the world of professional boxing after serving prison time for committing an armed robbery. Now he's reformed, and is the polar opposite to Balrog.
Advertisement:
Adon 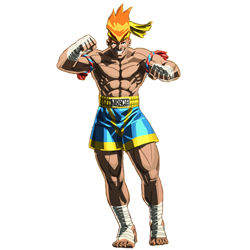 "I'll show you just how strong I am!"

Adon is the polar opposite of his former mentor Sagat. Where Sagat focuses on being defensive and taking advantage of his power and reach, Adon focuses on high mobility and aggression. He can easily bob and weave his way out of his opponents' effective range and punish them with an assortment of far-reaching attacks. His Jaguar Tooth is an off-the-wall diving kick that serves as a means to both quickly close the distance and reposition himself. His signature move, the Jaguar Kick, forces his opponents to think twice about blocking low, as it will hit them overhead. A very tricky character, Adon's style involves confusing and frustrating opponents while luring them into situations where he can press the advantage.
Sagat 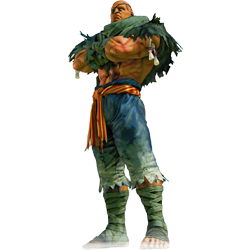 "You are not a warrior. You're a beginner!"

Sagat is absent from the events of Street Fighter V, with his name only being mentioned a few times in passing. However, he eventually returned as part of the Season 3 roster of DLC characters.

The original "anti-Shoto", Sagat takes the fundamental aspects of the staple Shoto moveset, and puts his own unique spin on it with his Muay Thai techniques. His playstyle is primarily defensive, with his long reach and unique zoning capabilities compensating for his below-average movement speed. Unlike most other characters, Sagat's Tiger Shot projectile can be launched at two different trajectories, high and low, to throw opponents who are inclined to jump over them off balance. He also possesses his own version of the Shoryuken, the Tiger Uppercut (originally the Tiger Blow chronologically), a devastating anti-air feared for its immense power. Lastly, instead of the Hurricane Kick, Sagat uses the Tiger Knee (formerly Tiger Crush chronologically) to propel himself forward and go over low attacks. Sagat focuses on overwhelming the opponent from full screen and punishing the opponent for approaching him, while also having tools to move him forward and trap the opponent further.