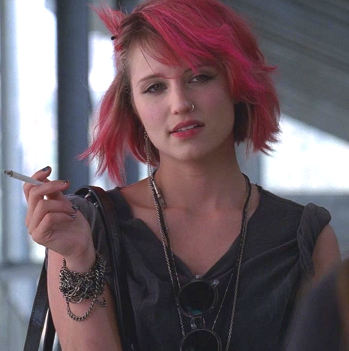 "Interest in your bold rejection of social norms as evidenced by your dyed hair."
— Wealthy, Successful Protagonist (to Lead Female), A Trailer for Every Academy Award Winning Movie Ever
Advertisement:

In fiction, it's rather common for characters who are rather unconventional to also have hair dyed an unnatural and usually bright color, such as pink, blue, green, or purple. This is applicable to a wide variety of character types: punk rockers, free-spirited artists, people who are not really right in the head, goths, people from conservative backgrounds dipping their toes into rebellion, and many more. It also allows for a wide variety of hairstyles, such as hair dyed a single bright color, the tips of the hair being dyed, a few bright streaks, colorful mohawks, or hair that sports multiple colors.

The rationale for doing so is quite simple: these characters reject societal conventions and stand out in a crowd, so they reject 'conventional' hair colors as a visual signifier. They contrast people who stick to their natural hair colors or, if they do dye their hair, keep it to other natural colors or subtler, more elegant color modifications like highlights. For example, a traditionalist or conservative parent might dislike the fact that their child dyes their hair orange.

This trope is slightly weightier for natural brunets because it takes more work to put and maintain color on dark hair compared to blonde hair. In addition, characters from predominantly dark-haired populations stick out even more than they would in communities where some people are already varying shades of brown, blonde and red. For example, the Gyaru Girl dyes or bleaches her hair (and darkens her skin, in the case of the ganguro and yamanba types) to contrast the Raven Hair, Ivory Skin beauty standard in Japan. Nonconformist Dyed Hair is something of an Evolving Trope as well, since dyeing your hair an unnatural color has been much more common and accessible since the 2010s.

Colorful hair dye is a prime vector for an Expository Hairstyle Change. Someone experimenting with rebellion might dye their hair to signify this newfound freedom. Conversely, someone cleaning up their act might grow out their hair out and cut off the dyed parts, or dye their hair back to a 'regular' color. A Former Teen Rebel might be seen with dyed hair as a Funny Flashback Haircut, for example.

Sister Trope to Quirky Curls, another hairstyling choice that indicates someone is quirky. There may be some overlap with Delinquent Hair, which covers any hairstyling choices that mark someone as a troublemaker. Compare and contrast My Hair Came Out Green, which is when the character didn't mean for their hair to come out an unnatural color after a dye job, Mistaken for Dyed, where someone born with unnatural hair might cause a kerfluffle because of its nonconformist connotations, as well as later iterations of Elderly Blue-Haired Lady, for the grandmas who choose to dye their hair odd colors. See also Kaleidoscope Hair, which might happen if they change colors frequently.